50 Cent says the Grammys are “out of touch” for their Best Rap Album nominations.

It’s that time of year again when the Academy is being scrutinized for their shortlisted picks. The Grammys announced their extensive list of nominees for the 62nd annual ceremony in 2021, and the hip-hop community is not gratified. 50 Cent, who executive produced what is widely considered one of the best albums of the year, Shoot For The Stars, Aim For The Moon by Pop Smoke, didn’t expect the project to get nominated, but he is still lashing out at the Grammys for being so far removed from the culture.

Taking to Instagram to share a photo of the nominees for Best Rap Album, FIfty scribed his thoughts in the caption of the post. “Best Rap Album,” he wrote with a series of laughing emojis. “They out of touch this sh*t ain’t it, get the f**k outta here,” he added. The rapper-turned-television mogul wasn’t the only one who wasn’t pleased with the final cut. 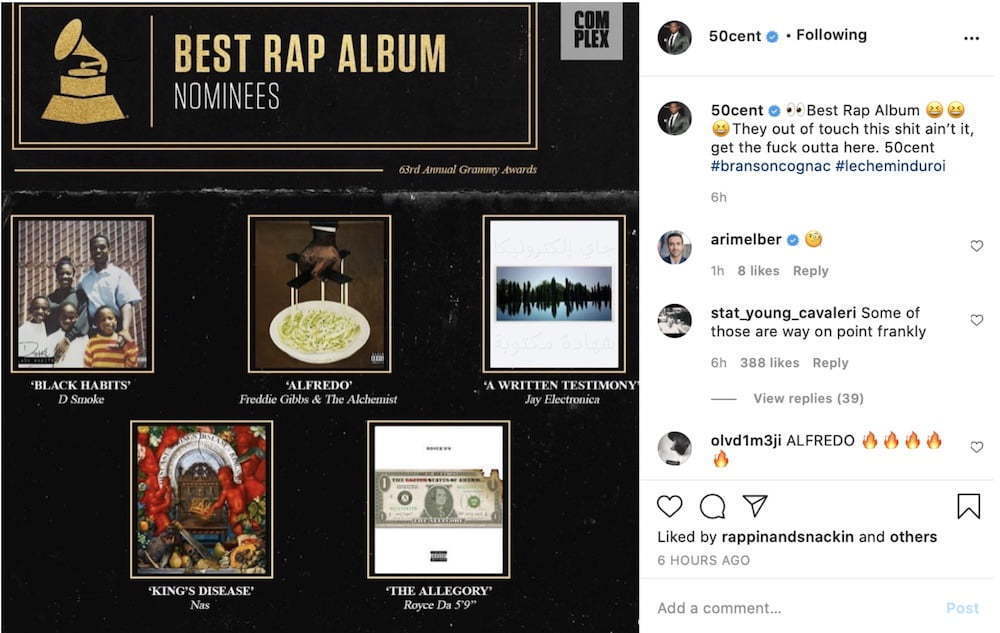 Fans have also been contesting the shortlist, especially with the noticeable absence of Roddy Ricch’s debut Please Excuse Me For Being Antisocial, as have other music executives, including Quality Control Music’s Pee Thomas, who believes that Lil Baby should have gotten a Grammy nod for his very successful sophomore album, My Turn. “Whoever making the decisions at the Grammys You all disconnected like a mf,” Pee tweeted. “you don’t speak for our culture. Congrats to all the nominees. #MyTurnAlbumOfTheYear.”

Lil Baby was nominated twice for his protest anthem “The Bigger Picture” in the categories of Best Rap Song and Best Rap Performance. Meanwhile, Pop Smoke’s “Dior” was nominated for Best Rap Performance as well. Earlier this month, Fifty told Rap Caviar that he didn’t think Pop Smoke’s posthumous debut would get nominated unless it was out of respect because he passed away. “They’re afraid to give him GRAMMYs because they think it’s teaching the audience to want to be like Pop. And to be like him is to be a part of gang culture,” FIfty said.

Even though he expected the snub, Fifty is still reacting to the announcement, likely because there were other records that were expected to make the list that didn’t. The nominees for Best Rap Album are Nas, D Smoke, Freddie Gibbs & Alchemist, Jay Electronica, and Royce Da 5’9. While they all delivered solid projects, so did Roddy Ricch, Pop Smoke, Lil Baby, DaBaby, Future, and more. It’s understood that they can’t all make the list, but fans definitely thought at least one would.

That being said, this is not to take anything away from the hopeful nominees who all have great work to show for their recognition.