Rihanna sounds off on the current U.S. elections by calling for every vote to be counted.

It’s another day of uncertainty for the US as they are still without an elected or re-elected President following the elections and some celebrities are calling for the due process to be followed before any decision is made. One such star is the ever influential, Rihanna, who told her more than 78 million fans on Facebook just how she feels. She posted “Count ?? Every ?? Vote ?? We’ll ?? Wait .”

The post, which was made yesterday night, November 4, has been shared more than 10, 000 times and has attracted over 250, 000 reactions. To drive her point home she posted the same thing on Instagram breaking it up into six separate posts. Collectively close to three million fans have interacted with those posts.

Her message is timely as around the US there have been several reports of unrest and protests across with some citizens demanding that the count continue while others demanding that it be stopped. In one of the key battleground states, Arizona, a ballot-counting station was closed in Maricopa County to the media and the public because of safety concerns. The decision was made after supporters of Donald Trump, some believed to be armed, gathered outside the building. 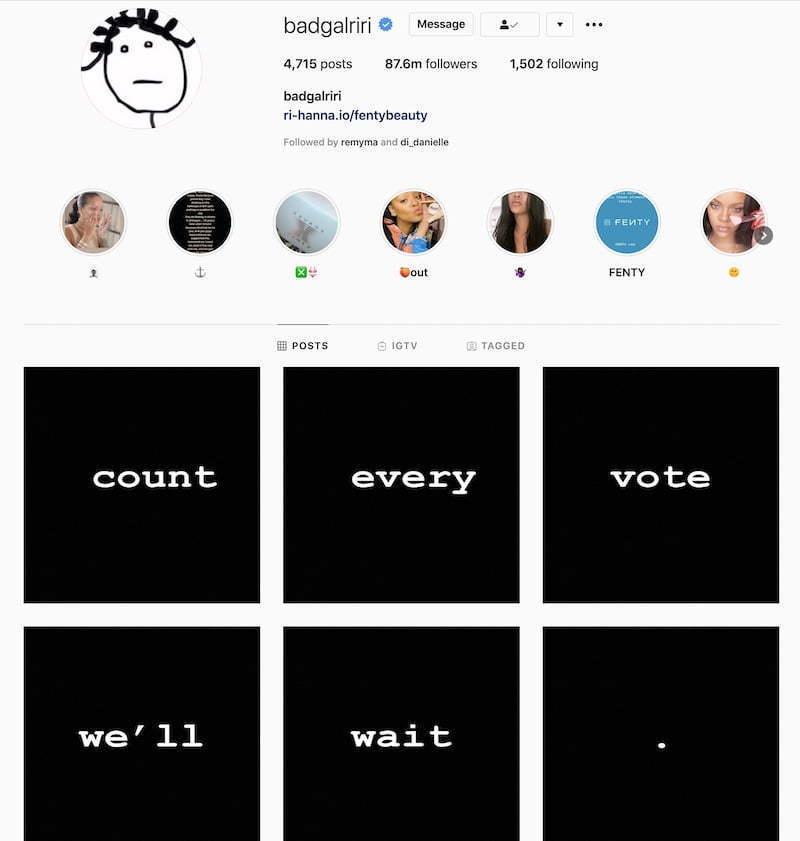 According to an official statement from the Maricopa County Elections Department:

“Staff at the @maricopacounty Elections Department will continue our job, which is to administer elections in the second-largest voting jurisdiction in the county.”

Americans and especially Democrats are on edge because the results of this election so far have mirrored the 2000 U.S. presidential election in which Florida recounted all of its votes and that resulted in George W. Bush being re-elected.

Other pockets of protest have popped up in Michigan and Arizona, as President Donald Trump’s supporters have continually gathered outside of polling stations. Rihanna’s advice comes at a time when the US is in definite need of some calming words.