Rich The Kid is the latest rapper to claim he was invited to meet Trump.

Donald Trump has taken a deliberate turn in his presidential campaign to focus on some influential members of the hip-hop community. Critics are saying his attempt to lobby black stars on his side is a classic hail mary play as he nears the end of his election campaign. Just last week, Lil Wayne had a sit down with Trump about the “Platinum Plan” with the president, who he said listened to him and “assured he will and can get it done.” Tunechi became the latest rapper to endorse the president in this election after others like 50 Cent, Kodak Black. Lil Pump, and more.

Now according to Rich The Kid, they are trying to fly him out as well. While the New York rapper may not seem like a worthy candidate for Trump’s endgame, he showed the receipts online. “Jus got a call Trump tryna send me a jet to Michigan. FOH I ain’t no sell out,” he wrote on his Instagram story. According to the text messages he shared, Rich The Kid was being invited to meet a bunch of billionaires and the trusted circle in addition to Trump. “We flying w pump as well,” the alleged texts also noted. 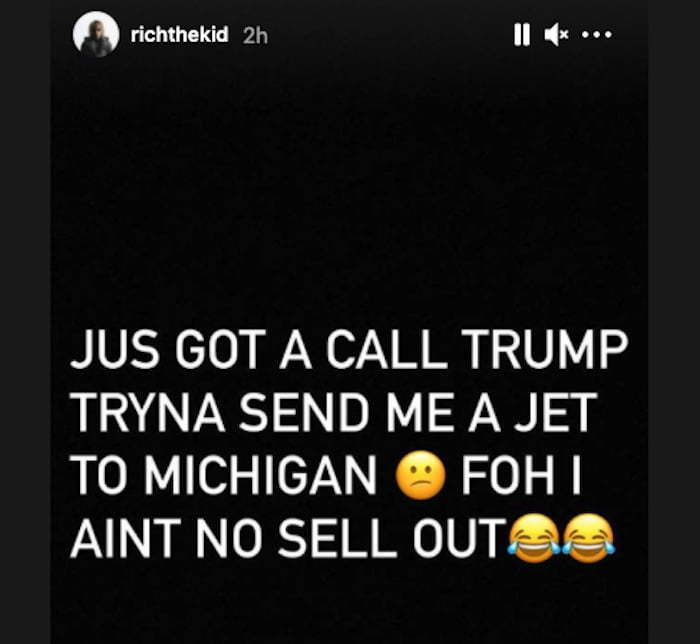 Fans were quick to call cap claiming President Trump doesn’t text like that. Though, legit or not, it still probably wasn’t Trump who was in charge of the correspondence. Some are even trolling Rich The Kid that he wrote the messages and sent them to himself. “Oh yeah people of the government write like that,” one fan wrote sarcastically. “This man cappin,” said another bluntly. “He sent that to himself,” another comment read.

Rich The Kid is gearing up to release his new collaborative album with YoungBoy Never Broke Again called Nobody Safe. The new project which is slated to arrive on Friday, November 13th is available to preorder now. Fans expected the full album to be available last month, but it seems The Kid didn’t have enough clout surrounding it yet, so he just dropped one of the songs called “Bankroll” instead. Though fans were livid and called him a clout chaser, the rapper is likely hoping the album will placate their anger.

We know Rich The Kid is no Lil Wayne but do you believe that legitimate members of Trump’s team really tried to fly him to Michigan?

I’m sick and tired of y’all playing my boi #richthekid like he would lie for clout especially bout trump… he just dropped the text messages on y’all. Now what??