Beenie Man is speaking out amidst collapsing at his mother’s funeral.

Dancehall veteran Beenie Man has had a rough few weeks. After losing his mother to long-term critical illness, the deejay had to help coordinate the funeral, where his exhaustion seemed to had reached full capacity causing him to faint. Today he offered a brief explanation and his gratitude to fans on social media.

Taking to Instagram to issue a statement, Beenie Man said in part, “On Sunday, October 25th I laid my Mom to rest. It was by far and still is the most difficult thing I have ever had to do. Leading up to the day of the funeral I was [physically] inbolved in every aspect of the planning and execution.”

He continued, “I kept telling myself maybe if U remained active I will be able to function. Unfortunately when it came down to that very last moment, it hit me and hit very hard This would be the last time I would see my mom. Despite the noise, the singing, the mourning, all I could hear was silence while watching my mom’s body being lowered into the tomb.”

In the statement signed by Moses Davis, Beenie Man sought to clarify that he was not admitted to a hospital or anything of the sort. While fans extended their good wishes and condolences, the dancehall star says he was comforted by his friends and family members. “Unfortunately, that very intimate and sad moment was recorded and then circulated around the world with false statements. I was not hospitalized, I was comforted by my friends and family,” the statement read. 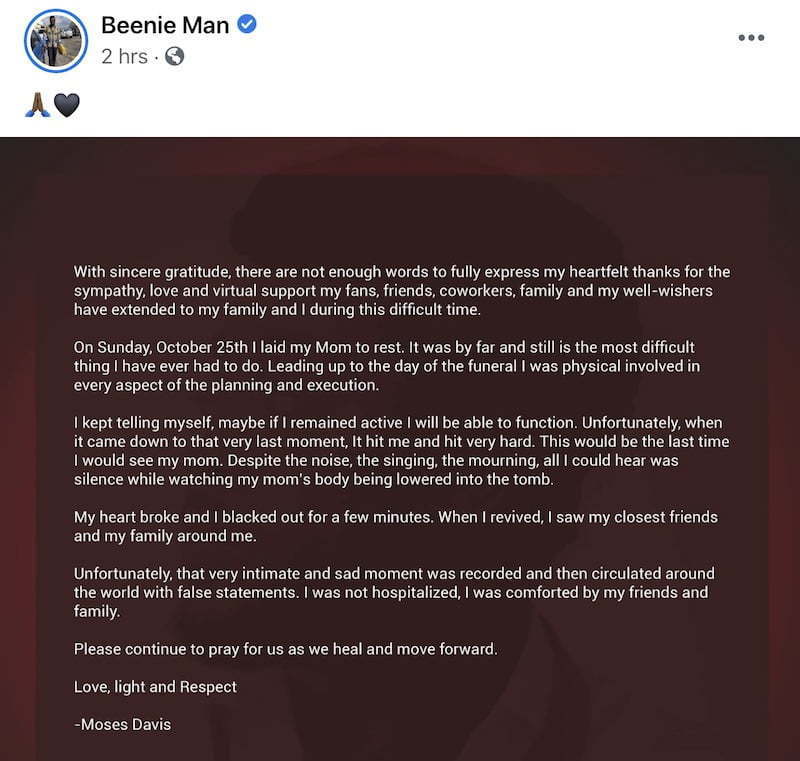 Beenie Man’s mother sadly passed away in early September after a long health battle that saw her in and out of the hospital. The deejay documented one of his last visits with her before she was discharged in July. In his note to his fans, Beenie added, “Please continue to pray for us as we heal and move forward.”