Juicy J sends Arbys a warning shot about using a Three 6 Mafia sample without clearance in a new ad.

According to a since-deleted tweet by rapper and producer Juicy J, the fast-food chain Arby’s might have some explaining to do. Taking to social media to share some information that came his way, Juicy wrote, “Good morning! I just found out Arby’s used a three 6 sample in their commercial with out clearing it hmmmmmmmmmm.” The alleged musical theft may have happened in 2017 when Arby’s released a commercial advertising their triple thick brown sugar bacon sandwich. 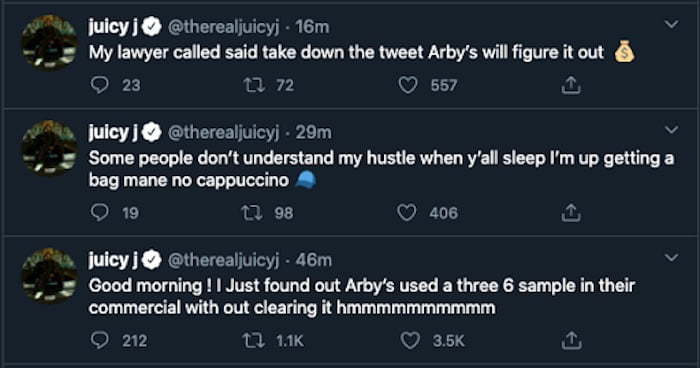 Juicy J did not directly mention taking any legal action against Arby’s in his Twitter accusation, but he and DJ Paul have been actively pursuing litigation against those who may have profited illegally from Three 6 Mafia’s work in recent months. In September, the pair sued $uicideboy$ for allegedly sampling over thirty tracks without legal permission, and Trippie Redd and Travis Scott have also had to deal with legal repercussions for their use of Three 6 Mafia music.

Since Juicy J quickly deleted the tweet about Arby’s, it is possible that he found out they did, in fact, take legal avenues to obtain the sample. However, he may have also decided to take the tweet down if he is seriously considering legal action against the fast-food chain. Either way, Three 6 Mafia has made it clear that they are fed up with people and businesses using their music to make money without their permission.

Arby’s has yet to respond to the accusation, but this is likely not the last we will be hearing about the situation.