A now-viral photo of dancehall artiste Spice kissing on a tall, strapping fellow is all the proof some fans needed to confirm that she had been stocking up on the inches in recent months, and we are not talking about her new song to promote her brand Faces & Laces. It is usually said that seeing is indeed believing, and a picture can also tell a 1000 different words. So is the mystery man a hoax, or is it the real deal? Aside from Spice fans, which now total a whopping 3 million on Instagram, it is alleged that her ex-fiance’ and baby daddy, Nicholas Lall is also a firm believer of what was captured on camera.

The evidence of this comes in the form of a very territorial comment, which goes as follows: “No Other Man Can’t Have you but me Member that Me First Kiss You So Him Late.” The comment was laced with a ton of laughing emojis along with a confident “#CantHurtMe” hashtag to top it off. Spice and Lall called the curtains on their tumultuous decade long relationship back in 2015.

The two were featured in the media on numerous occasions for the very public blowouts, which continued post-breakup, as Spice bashed her baby daddy for not pulling his weight with their two kids, Nicholas Jr. and Nicholatoy. Back in July, Lall accused Spice of not allowing her kids to interact with his other children, which he got outside of his relationship with the reigning Queen of the Dancehall. The deejay, who currently has full custody of the two kids, hit back, claiming that Lall has made no consistent effort to support the two kids, neither physically nor financially.

Still, Lall’s recent comment has nothing to do with the kids and instead takes aim the singer’s love life, which seemed dormant for nearly half a decade until the CEO of Atlanta’s JBudd Media Inc., Justin Budd, aka JBudd, entered the picture. There is nothing like a vibrant eruption, and it seems Spice is bursting with emotions from every angle, now that the cat is out of the bag. A video of herself supposedly confessing the depth of her love for her new beau has been receiving heavy rotation on social media.

While Spice does not actually mention Justin’s name in the clip, the theatrics observed in the back and forth between a mystery female outside of the shot of the camera are quite convincing. “Girl me in love! Me in Love! Me have a man wa me love! Me can’t hide it, me love the boy!” The “Romantic Mood” singer confesses. Maybe the festivities of the clip in question is what sent her ex-fiance/baby father to social media to proclaim that he was and is the only true ruler of the spicy one. Still, some fans are not buying the newfound romance. After all, the Love & Hip Hop star is known for pulling a fast one on her fans. 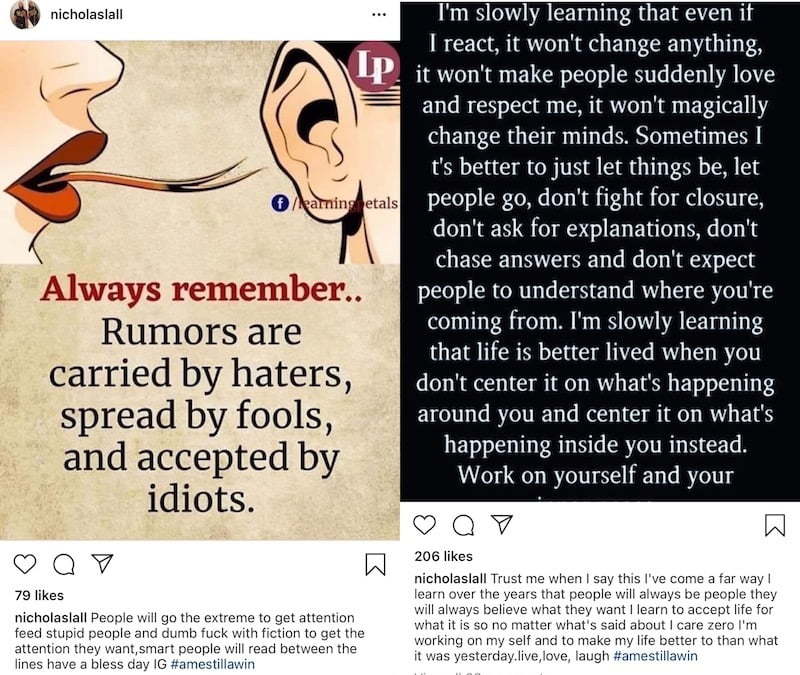 There are also some speculations surrounding the authenticity of the comment allegedly made by Nicholas Lall. He seemingly responded on Instagram saying, “Trust me when I say this I’ve come a far way I learn over the years that people will always be people they will always believe what they want I learn to accept life for what it is so no matter what’s said about I care zero I’m working on my self and to make my life better to than what it was yesterday.live,love, laugh.”

Perhaps someone doctored the comment or maybe Lall reacted in good fun. Let’s hope these two can find a way to co-parent.