Future is mourning the loss of Dallas rapper FXXXXY who was signed to his Freebandz label. The rapper died at just 22 years, and his cause of death is yet to be revealed. Future took to Instagram to share a screenshot of his last conversation with the rapper just one day before his demise.

In the text messages, FXXXXY vowed to keep Future’s legacy going with his Freebandz outfit. He wrote, “umma keep this FBG Sh*t goin and yo name forever don’t trip!!” before following up with “See u soon,” with an eagle emoji. “Jus yesterday…. GONE WAY TOO SOON,” Future wrote on Instagram stories. 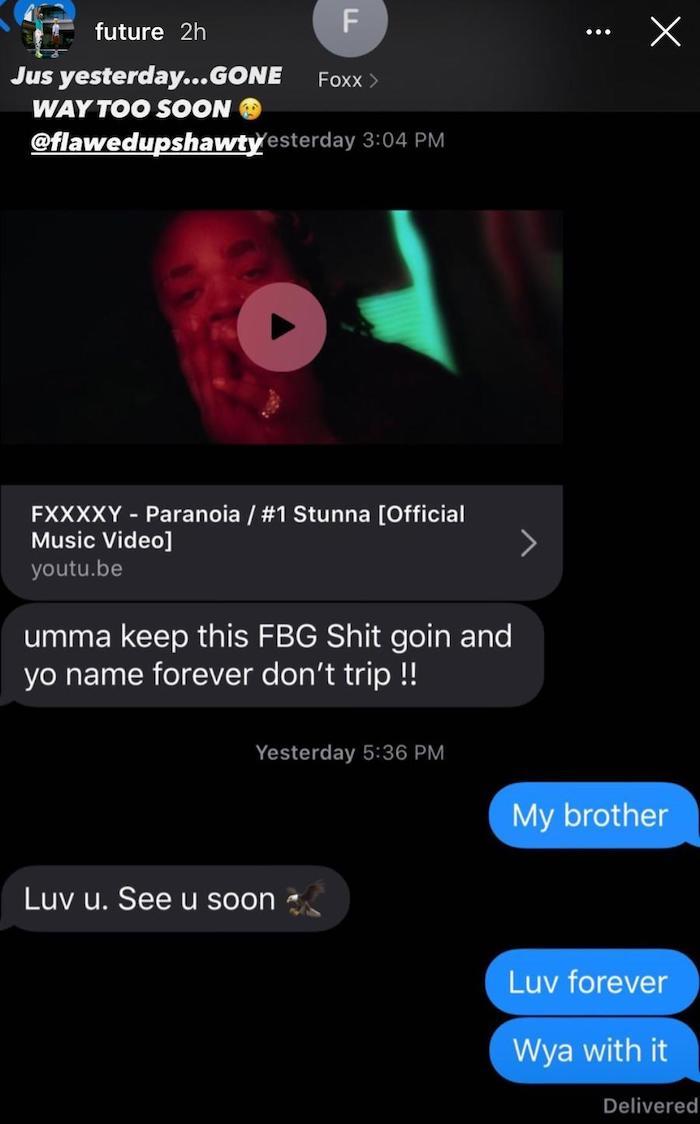 A member of the departed rapper’s management team, Baby Shad, also confirmed his death via Twitter where other rappers and fans have been reacting with grief as well as disbelief. FXXXXY dropped a music video for his latest single “Paranoia” earlier this month, which his fans are currently bumping to.

The rapper collaborated with a number of popular hip-hop artists throughout his short career, including Lil Durk, and Gunna with whom he made his 2019 single “Need U.” The track has racked up close to 900K views on YouTube and over 3 million streams on Spotify at the time of this report. FXXXXY also produced Future’s songs “Government Official,” and “Extra” off his 2019 EP Save Me.

Fans of the young Texas rapper have been reacting online, flooding his social media with RIP messages and condolences. FXXXY was a young songwriter, music artist and producer with undeniable talent. Another young adult rapper with immeasurable potential has fallen.

It was a pleasure working with @tanayahenry and her team to produce the @lacebytanaya live fashion show. Everytime tanaya comes to me with an idea it turns out even better than expectations. Special thanks to @jus10henry and his team @leardigitalmedia for making the live stream look so amazing. Thanks to the whole team, make up, hair, production assistants wardrobe and the extra hands who came to help out. Gonna yah everyone in the morning