Shenseea is ready for a girlfriend and her female fans sending their applications.

Shenseea has always trodded the thin line of what her fans think is acceptable vs. what she desires, or at least what is marketable, especially when it comes to her sexuality in the media. In 2019 Shenseea released the music video for “Blessed,” which featured Tyga. The visualizer had one special scene, which shows the “Pon Mi” singer curling up to another female as they laid in bed. The image was immediately bashed by Jamaicans for what many saw as their forced consumption of homophobic content. Well, Shenseea is once again professing her admiration of the fairer sex, and this time she has opted to place it in words, obviously for clearer understanding.

Based on the location tag on one of her recent posts, the dancehall baddie was chilling at a poolside in Miami, Florida, when she decided to snap an image of herself looking like a cross between a mermaid and an angel. She took to the caption to tell just who her booty popping pose was being directed to. “Think I’m ready for a girlfriend now,” she wrote before leaving an application emoji for signs ups. She also tagged the clothing brand @carcellfransiva, which designed the fit she was wearing.

Clearly, Shenseea has been on the picking list for quite a few females, with many of them dropping application emojis in order to show that they are available for the coveted position. The truth is, the “Good Comfort” singer had been turning all sorts of heads way before her most recent post. Filipina artiste MK XYZ showed the Jamaican some love in her own comment section after Shenseea tagged Konshens to a TikTok snippet of MK XYZ lipsyncing his featured verse on Doja Cat’s “Wine Pon You.”

The post also attracted a comment from another fan who felt MK XYZ was deserving of a physical meetup with Shenseea. “@shenseea give ar di pumz ASAP!!! she deserve eeh,” came the comment. 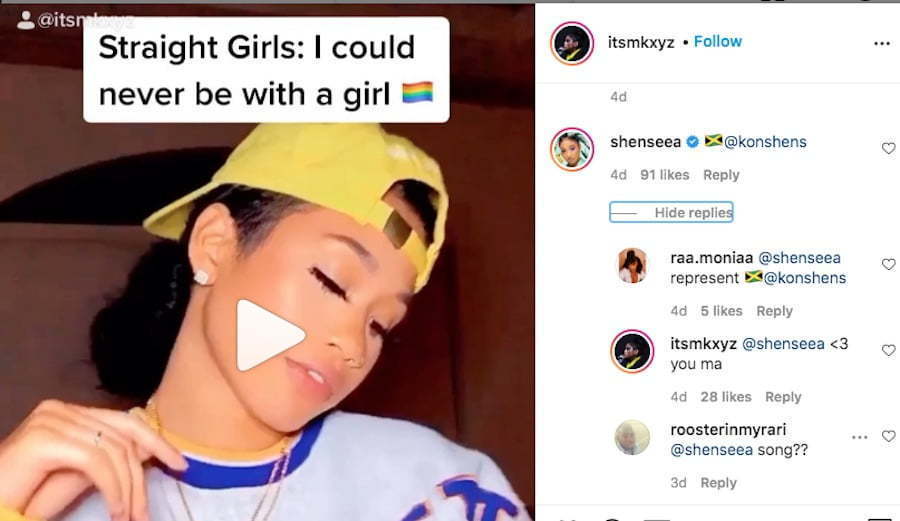 Meanwhile, Jada Kingdom caught her on her “BudumCam,” Alexis Skyy sent heart emojis, and both Wasp Above Average and Natel, who are males, joked about being a lesbian just to shoot their shot and get in on the action.

However, UK entertainer Ms. Banks wanted to know if Shenseea was “sure sure” about what she desires. Nikki Chromazz was clearly not buying the gimmick and called the need for a female lover cap, at least for now. She wrote, “Issa phase no fall fi it a man we really need.”

Shenseea has been teasing her fans a lot as of late, with one of her most recent trolling acts involving the posting of a photo that insinuated that she was pregnant. Almost immediately, her newly formed friend Jada Kingdom expressed her disbelief when she said, “Nuh jus yesideh yah tell mi seh yu nave nobody fi breed yuh? no sah mi shook!”

For social media investigators, Jada’s comment may have meant one of two things. The first explanation is that Shen is single, and the second is that she is with someone of the same sex. However, Shenseea seemingly keeps throwing said fans/detectives off her trail. One such exampled happened on the set of one of her video shoots, where she referred to Romeich as her ‘MAN-ager.’

Still, this could all be one big misunderstanding, and the term girlfriend may actually mean a female companion with whom she can discuss boys, music, and other pretty little things. What do you think?