Chris Brown is one of the industries go-to persons when it comes to art and style. However, his most recent choice of jewelry has left fans labeling it as an admission of his love affair with one specific controlled substance. Breezy recently took to Instagram to share images of his new gold necklace. What’s interesting about the necklace is that the pendant is actually a gold razor blade, which has small cuts of sparkling diamonds to the bottom of the blade, possibly representing cocaine.

The pendant also bears the ‘Tuff Crowd’ brand, which Chris Brown regularly reps on his social media account. In one post he showcased himself wearing the new chain, which was paired with another cute pendant of 2 ice-out smiling faces. That post was captured, “Golden CHILD.” Chris Brown disabled the comments on his Instagram posts, so fans took to the comments on other social media accounts that reposted the photo with most folks alluding to Breezy communicating what he loves to do. 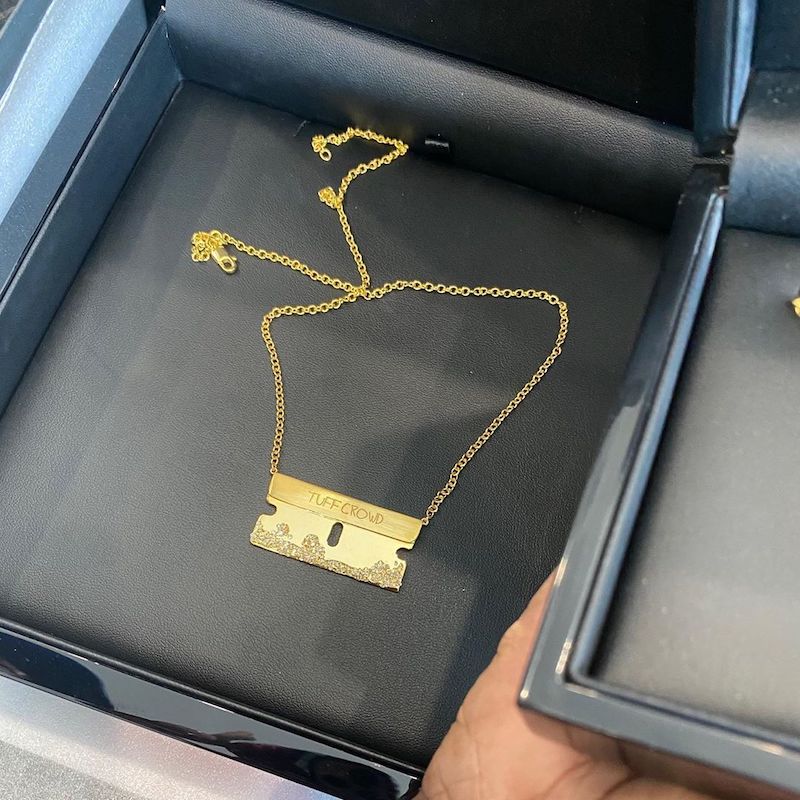 One person wrote, “Yea he def loves him some COKE!” Another fan questioned, “Did the love of my life just admit to doing coke? Please tell me this just for other ppl… like I’m officially turned off.” If you are still unaware of what the pendant means you can do a bit of research on the topic. Actually, we will save you time and let you know that razor blades have long been used to cut up coke before someone is able to snort it. While his post may not be a confirmation that he is using, it does make you question why someone with a past littered with rumors of drug use and confirmed assault would wear such physical a representation.

In 2017, Billboard ran an exclusive on Chris Brown based on the views of various persons close to him. He “would stay up for as long as three days in a row, snorting cocaine and dabbling in Xanax, marijuana, Molly and lean” mentioned one member of his team to Billboard. According to the anonymous member, “a mixture of promethazine/codeine syrup and a soft drink,” was used to knock Brown off the high from his previous intake a ” coke or Molly.” It is the belief of some persons that Chris Brown was also caught snorting cocaine while in a club just last year, even though his fans counteracted that he was simply lighting a cigarette. We guess only Chris Brown and the people at the table he was at can confirm or deny that one.

The singer has also picked up other ‘losses’ over the years, with the most prominent one being the 2009 physical assault of his then-girlfriend Rihanna. Chris Brown was trending on Twitter today in relation to the same incident; becoming a reference point shortly after Megan Thee Stallion confirmed that Tory Lanez was the man who shot her in her feet.

If the rumors of Brown’s drug use do prove to be true, we hope that it is not too late for one of the greatest entertainers the world has ever seen to get some real help.

#TSRCoinz: #ChrisBrown reveals a new piece he added to his jewelry collection—an iced out razor blade! ??