Popcaan is being accused of not doing enough for Unruly artists, but the dancehall star is clapping back.

In dancehall music culture, fans don’t just look at your catalog but also the number of artists you’ve put on. Though Bounty Killer, the dancehall God Father takes the cake for having “buss” the most artists in the genre, many other prominent artists can say they’ve done the same for a number of acts.

OVO signed dancehall artist Popcaan who was introduced to fans by dancehall mogul Vybz Kartel has his own entertainment company called Unruly Entertainment. Under his label, he has introduced many artists, including Quada, Unruly Cuz, and more. Recently, Popcaan released a new cypher video featuring the Unruly labelmates called the Unruly Medley, but even then, Popcaan was accused of not doing enough to help the artists he has signed.

When the deejay first debuted the preview of the Unruly Medley on Instagram, one person made a negative comment that Popcaan was sure to save so he could later post it and prove them wrong. “Yuh nah push out the artiste dem youth a bay preview thing yuh deh pon,” the social media user commented. “A wonder when some young artiste ago realise say them nuh affi run up inna nuh man camp when dem have real talent cause some man ago drain them energy. 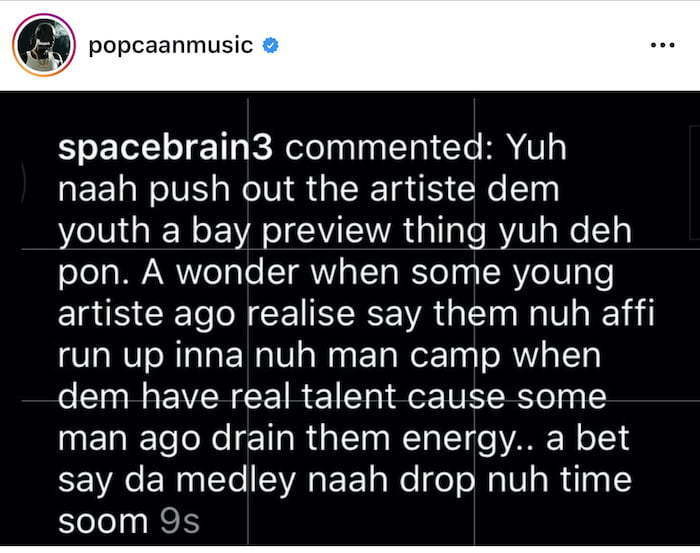 “A bet say da medley nah drop nuh time soon,” the user added. Popcaan screenshot the comment from his Instagram notifications within 9 seconds of it being furnished online on June 23. Four days later when he premiered the music video on June 27, he shared the comment in a post on his Instagram page. “Unruly medley out now go watch it,” Popcaan wrote. “Humbre me save tha msg ya fi tell yo s**k out yo muma!!! anyway support young artist and encourage them because we all know it sweeten labor!! #UNRULY.”

Unruly medley out now go watch it?? humbre me save tha msg ya fi tell yo suck out yo muma!!! anyway support young artist and encourage them because we all know it sweeten labor!! #UNRULY

It’s clear that people should think twice before they come for Popcaan because the Unruly deejay is certainly keeping his eyes peeled. Do you think Poppy can do more to propel his Unruly artists?