Industry artist manager Wack 100 has publicly denounced Joe Biden and declared his support for Trump in the 2020 presidential election.

The Game and Blueface’s manager, Wack 100, has become notorious for being widely disagreeable with his statements. When he isn’t disavowing the legacy of The Notorious B.I.G. and Nipsey Hussle’s years of humanitarian work by saying they’re not legends, he is advocating for public enemy number one – President Trump. Wack 100 took to Instagram in a fit of rage to expose some perceived racist comments and actions from Joe Biden’s political history. “F**K BIDEN – SWIPE LEFT – He Playing The Game – at least We Know What We’re Going To Get Out Of Crazy Ass Trump,” Wack wrote alongside the post. The screenshots he shared included a 1977 article which reported that Biden said schools would be a “racial jungle” if the decision was made to integrate.

“Unless we do something about this, my children are going to grow up in a jungle, the jungle being a racial jungle with tensions built so high that it is going to explode at some point,” Joe Biden said in 1977. The post also included a photo of the presidential candidate with former U.S. senator Robert Byrd who was a known member of the Ku Klux Klan. Biden later called this his greatest mistake. These associations obviously reflect poorly on the POTUS aspirant, which was clearly Wack 100’s aim. The artist manager also shared a more recent controversy where Joe Biden said you’re not black if you’re torn between him and Trump. 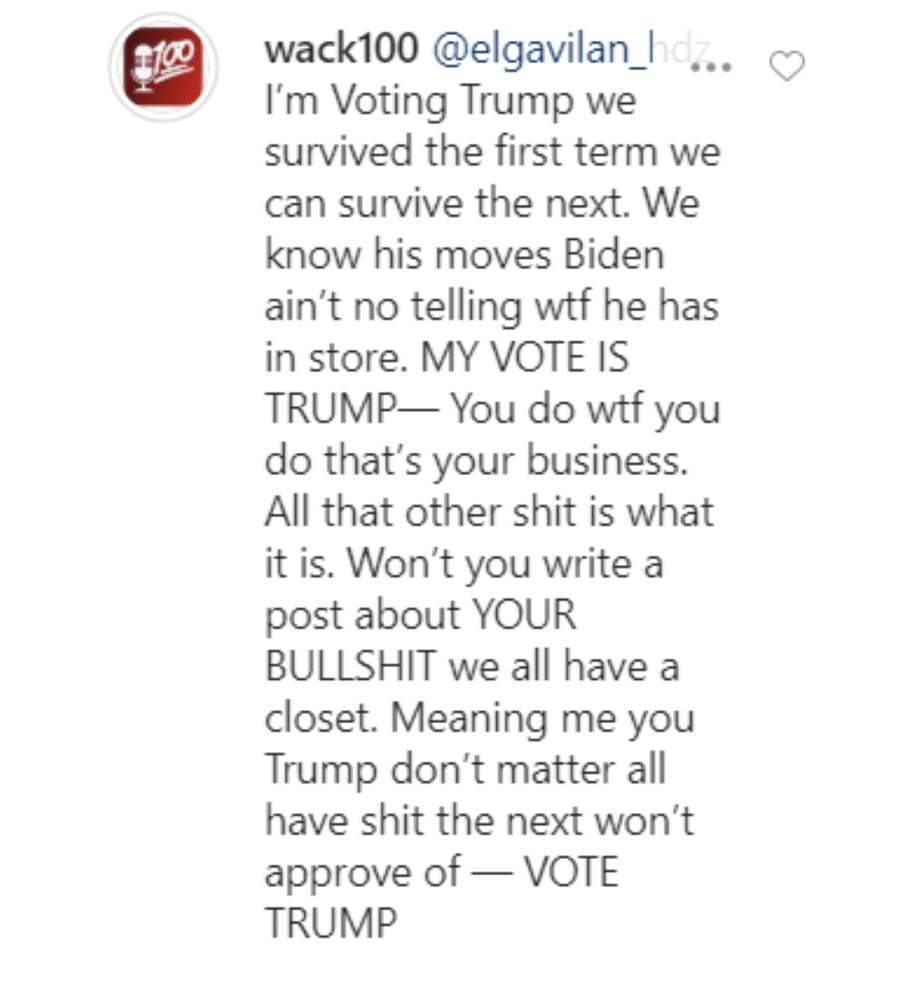 Wack 100 further stated his point in the comment section where he replied to a fan saying, “I’m voting Trump we survived the first term we can survive the next,” he wrote. “We know his moves Biden ain’t no telling wtf he has in store. MY VOTE IS TRUMP – You do wtf you do that’s your business. All that other sh*t is what it is. Won’t you write a post about YOUR BULLSH*T we all have a closet. Meaning me you Trump don’t matter all have sh*t the next won’t approve of – VOTE TRUMP .”

It goes without saying that everyone is entitled to their unique political views. However, fans were questioning the certainty of Wack’s position. Apparently, his post contradicted some previous statements he has made, and so a fan commented, “@wack100 you flip flop too much” with the covered face emoji.

Do you agree that it’s better to go with the devil you know than the devil in disguise?