On Friday, the world got to experience just what legendary producer/songwriter Teddy Riley is like when he is cranky and annoyed. However, he is now vehemently apologizing for his actions on the night.

Teddy Riley lost his cool when he shot back at comedian Tony Baker with a pretty nasty diss during the most recent Verzuz battle between Alicia Keys and John Legend, which was held to celebrate Juneteenth. The Verzuz battle ran smoothly, with both entertainers caressing their pianos for most of the night. However, some time through the night, Baker noticed that Riley got in on the session and decided to crack a funny, using the terrible internet dropouts that Riley faced during is battle against Babyface as the basis for his joke.

“Teddy Riley pulled up!” Tony said. “Let’s pray that we don’t lose the internet connection.” However, Riley was not in any mood for jokes and shot back with a stinging comment.

“Tony Baker if you want to continue being funny you got to let Oh jokes become the pass or you will be stuck in the past brother. Grow up and get money! Remind you to joke Only makes me money but you still broke,” he said. The comedian decided to share a screenshot of Riley’s comment which he captioned, “Gotdammit. @theshaderoom TEDDY HAS HAD IT!! His typos deflated the whole assault tho….” 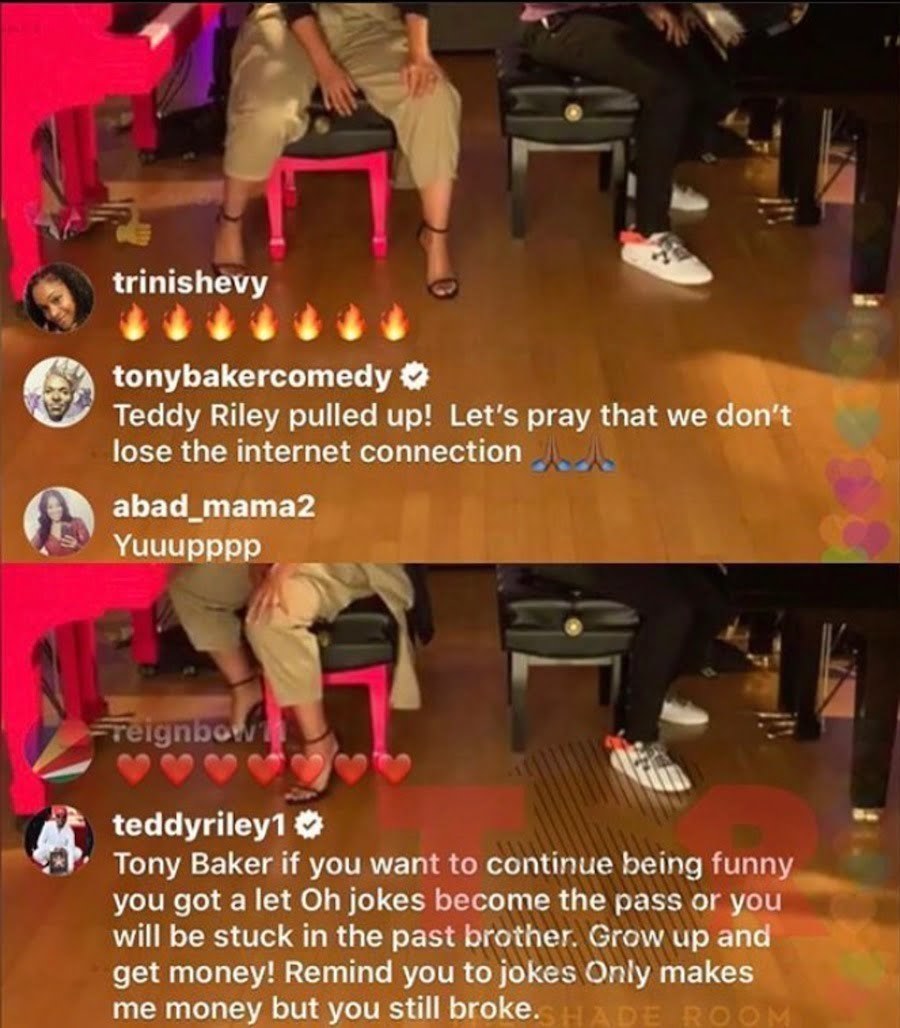 A good night’s sleep can do you a world of good, and it seems that is just what Teddy needed to notice just how far he took things.

“First of all, I want to say to Tony Baker, my apologies as a brother to a brother,” he said as he began his apology. “You already know that what I do is music. I don’t tell jokes and I don’t do the prank thing but sometimes you have to— when you go to a comedy club or anything— you have to be able to embrace that.”

“I had just woken up and I wanted to see Alicia Keys and John Legend ’cause I’m a fan, you know, we all get to be fans and that was my moment to fan out and see my brother and sister do their thing,” he added. “I wasn’t looking forward to a meme or a comedian to come out and say ‘Teddy Riley’ and then John Legend came out and said some stuff, which is cool. I just snapped when it came to Tony and I didn’t mean to.”

In light of the impact and importance of Juneteenth, he continued, “My whole thing is, today’s a day where we uplift and we push and we encourage. This nation needs to come together because the moment we do, we are strength. To Tony, man, I hope we get to work together and my apologies to you and to anybody if it was offensive ’cause that’s not me.”

In keeping with the positivity of the apology, fans can find reruns of the Verzuz clash on most major streaming platforms.