Swizz Beatz is apologizing for calling Drake out of his name after a ton of backlash from fans online, but the rapper’s camp is not open to accepting it and wants him to keep the same energy.

Verzuz co-founder Swizz Beatz says he was “in the wrong space and in the wrong energy” on Saturday night when he made some comments about Toronto rapper Drake that he has come to take back. During an Instagram Live talk with Busta Rhymes, Swizz was discussing a leaked song of Busta and Drake’s that surfaced online last week. According to the producer who questioned why the song was never released in the first place, Drake needs to put some more respect on Busta’s name.

During the talk, Busta Rhymes tried to explain that everyone has a different creative process and timing so he was never mad about the song not coming out. However, Swizz Beatz’s qualms were over the fact that Busta Rhymes is a veteran and a hip-hop legend and should have been dealt with better than that. According to Busta, he is a fan of Drake, but the lines of communication between them were crossed, and they never had the chance to talk about putting the song out. Mind you, this song was recorded years ago when Busta Rhymes was a part of the Young Money faction. Though he never got an explanation, Busta seemed to be okay with it because it was ‘Drake.’ Swizz, on the other hand, had questions. 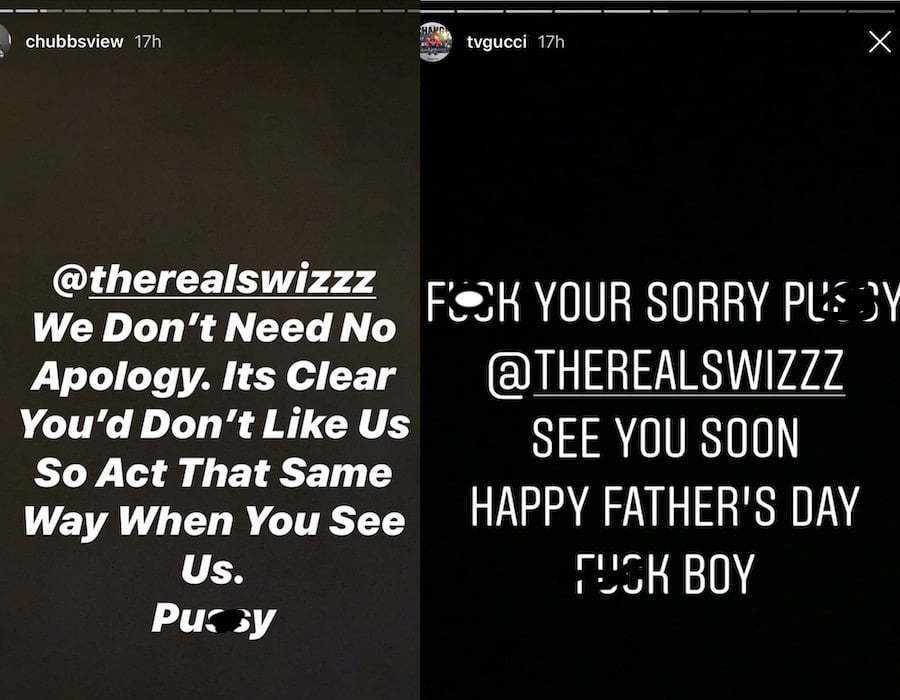 “You Busta Rhymes, you ain’t get an explanation on something you wanted to put out? You Busta Rhymes,” Beatz said. “What are we talking about? Man’s a big man.” Busta tried to be as objective as possible when he explained to Swizz that Drake never came to him to make a record, the rapper just wanted to get on J. Dilla’s beat and Busta completed the track. However, Swizz implied that though it’s years later the leak might have come from Drake’s camp and would have caused a bust for Busta who will never see a dime from the record. “At the end of the day, n***as is pu**y for real. What’s up? Pop off. Let’s go,” the producer said. He must have forgotten that Drake has a legion of dedicated fans that don’t play. Swizz’s statement sent Drake fans into a frenzy, and they were sending shots the producer’s way real quick.

The following morning on Father’s Day, Swizz Beatz apologized for calling Drake a pu**y, and he was noticeably not drinking wine this time. “I want to address my actions on Zone Radio last night man,” he began. “Mainly ’cause I was in the wrong space, I was in the wrong energy, and I hate that my kids and other people got to see me be on that side. I was a little nice, I was a little excited. I definitely spoke on somethings that I definitely shouldn’t have spoke on.”

He continued, “Although I might feel a certain way about a certain person and different things like that, as a G I’m man enough to say that I did that on the wrong platform and I wasn’t supposed to do that like that; ’cause I wouldn’t respect somebody else if they did that like that.” Drake’s camp was not very accepting of the apology, and some of his crew, including his right hand Chubbs and TV Gucci, spoke out on Instagram.

“F**k your sorry pu**y @therealswizz see you soon Happy Father’s Day f**k boy,” TV Gucci wrote on his Instagram story. Chubbs also wrote, “@therealswizz We Don’t Need No Apology. Its Clear You Don’t Like Us So Act That Same Way When You See Us. Pu**y.”

It seems Swizz Beatz and Drake are officially at odds if the rapper’s team has anything to say about it. As Swizz pointed out while talking to Busta Rhymes, he and “the kid” have made hits together, and it’s all love and nothing personal. Do you think these two will pick up the phone and makeup soon?