After devising a ton of workarounds to avoid making court-ordered payments to Priscilla Rainey, it looks like it’s finally time for The Game to settle up.

It’s been four years since Priscilla Rainey sued rapper The Game for sexual assault, but he has managed to evade paying the settlement. Rainey was a contestant on The Game’s VH1 reality show “She’s Got Game,” which was a competition for his love. According to Priscilla, the rapper sexually assaulted her during her time on the show, which led to a lawsuit being drawn up against him. Since The Game didn’t even bother to show up to court on the appointed date years ago, a judge ruled in Rainey’s favor and awarded her $7.1 million.

Rainey has only reportedly received about 70K in payments. Reports are that Game has been finding loopholes so as not to share his assets with his accuser. One of many strategies he’s employed includes hiding his assets with his manager, Wack 100, who has said that he does not own Rainey a thing. Well, The Game had a good run, but this week a judge threatened to lock him up for contempt if he orchestrated another way to avoid handing over Priscilla Rainey’s $7 million. The judge ruled that the alleged victim would be paid from Game’s BMI royalties until the debt is settled. 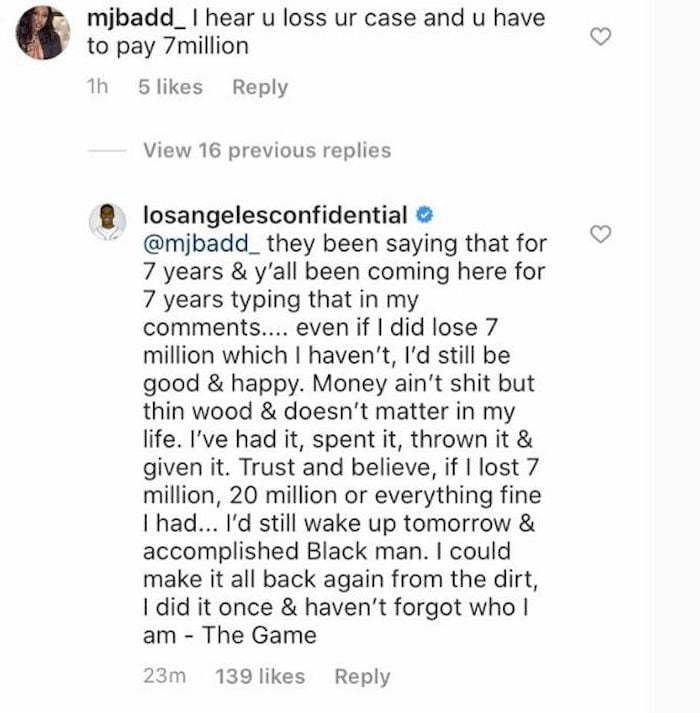 Can you imagine all your income for your music going straight into another person’s pocket? The Game sure can’t as he still seems to be in denial about it actually happening. A concerned fan on Instagram asked, “I hear you [lost] ur case, and u have to pay 7million.” The rapper scribed a lengthy reply in the comments tagging the fan. “Even if I did lose 7 million which I haven’t, I’d still be good & happy. Money ain’t sh*t but thin wood & doesn’t matter in my life. I’ve had it, spent it, thrown it & given it,” Game said in response to the fan’s inquiry. “Trust and believe, if I lost 7 million, 20 million or everything fine I had… I’d still wake up tomorrow [an] accomplished black man. I could make it all back again from the dirt. I did it once & haven’t forgot who I am.”

Some fans think The Game is capping while others say he might still intend to find ways around letting off $7 million. Do you think the rapper would risk getting thrown behind bars to avoid paying his accuser?