Doja Cat admitted that her apology was doctored as she addresses her Twitter lynching on Instagram Live.

For the past week, the motion to cancel Doja Cat has been rampant on social media. Following some disturbing accusations of racism, fans soon started digging into her past, where they piled on more and more supporting; evidence. By the end of it all, the rapper was being called a racist for joining “white supremacist” chat rooms for expressing that she hates her natural hair; for a racially insensitive and tone-deaf song she recorded years ago, and more.

Now Doja Cat is admitting that after 98 recorded apologies and a written statement edited by her and her team, it’s best she addresses things head-on and in real-time. “Like any business, like any conglomerate, there would be many people trying to protect what’s going on,” Doja Cat explained about her previous apology during an Instagram Live session she hosted on Monday. “So I’m just gonna, one, debunk everything. I have bullet points.” She added, “Recording myself apologizing and recording myself sounding perfectly diplomatic is the biggest f**king lie I can make to you.”

The “Say So” rapper began with the topic of self-hate. For context, Doja Cat is a mixed woman – half white and half black. An old video of her speaking ill of her 4C-type natural hair resurfaced and fans called foul claiming that the rapper despised her African features. According to Doja Cat, she does understand where fans are coming from with that. However, it is not uncommon for people with that kind of hair to complain about manageability. “A lot of my friends would agree who have hair like mine that they have a hard time taking care of it,” she said.

#PressPlay: #DojaCat got on live to apologize and explain some of the controversies surrounding her, thoughts Roomies? #Swipe via @akademiks @dripsaucemedia

In her statement, she also explained her chat room days, where it was alleged that she would interact happily with alt-right racists. Doja explained during her IG Live discussion that she and her friends would join public chat rooms and implied that it was harmless. “It’s me, my friends. You go in there,” she said. “I learned there are racist people who come in and out of the chat. They’re there. They happen, and then they’re banned. The idea that this chat room is a white supremacist chat room is, I don’t understand in any way.”

One of the most compelling pieces of supporting evidence recovered by the #DojaCatIsOverParty was her old, newly resurfaced song that has been labeled as racist. The rapper has admitted that it is quite possibly the worst song in the world. The song made reference to the term “Dindu Nuffin” (didn’t do nothin’), which is a stereotypical racist slur used to regard black people as criminals.

#PressPlay : More clips from #DojaCat ‘s live where she discusses her dating preferences and saying the “N” word. #Swipe via @akademiks @khleothomas

“To anybody who I have hurt using this term when I used it, it was because I was in chat rooms all the time and I was kinda locked away and I was always on there dealing with people coming at me left and right talking about different slanderous terms after another,” Doja explained.

She continued, “It was to kinda take back and f**king just say f**k you to those people. The song, however, I agree. Maybe the worst song in the entire world. Not good. Lyrically lost. The worst song. The lyrics in the song don’t make sense. I see some of the interpretations of the lyrics. A lot of them are wrong. I can rewrite the lyrics for you guys. I don’t know how important that is but if you need me to, I can. But that song is in zero ways, in no way, connected to police brutality or Sandra Bland.”

Doja previously posted a written statement claiming, “I’m sorry to everyone that I offended” about her participation in the chat rooms. “I’m a black woman,” she wrote. “Half of my family is black from South Africa and I’m very proud of where I come from.” Now that she has basically invalidated that apology, which she says is an edit from her and her team, and has offered her own explanation, it seems she’s taken the damage control to another level. 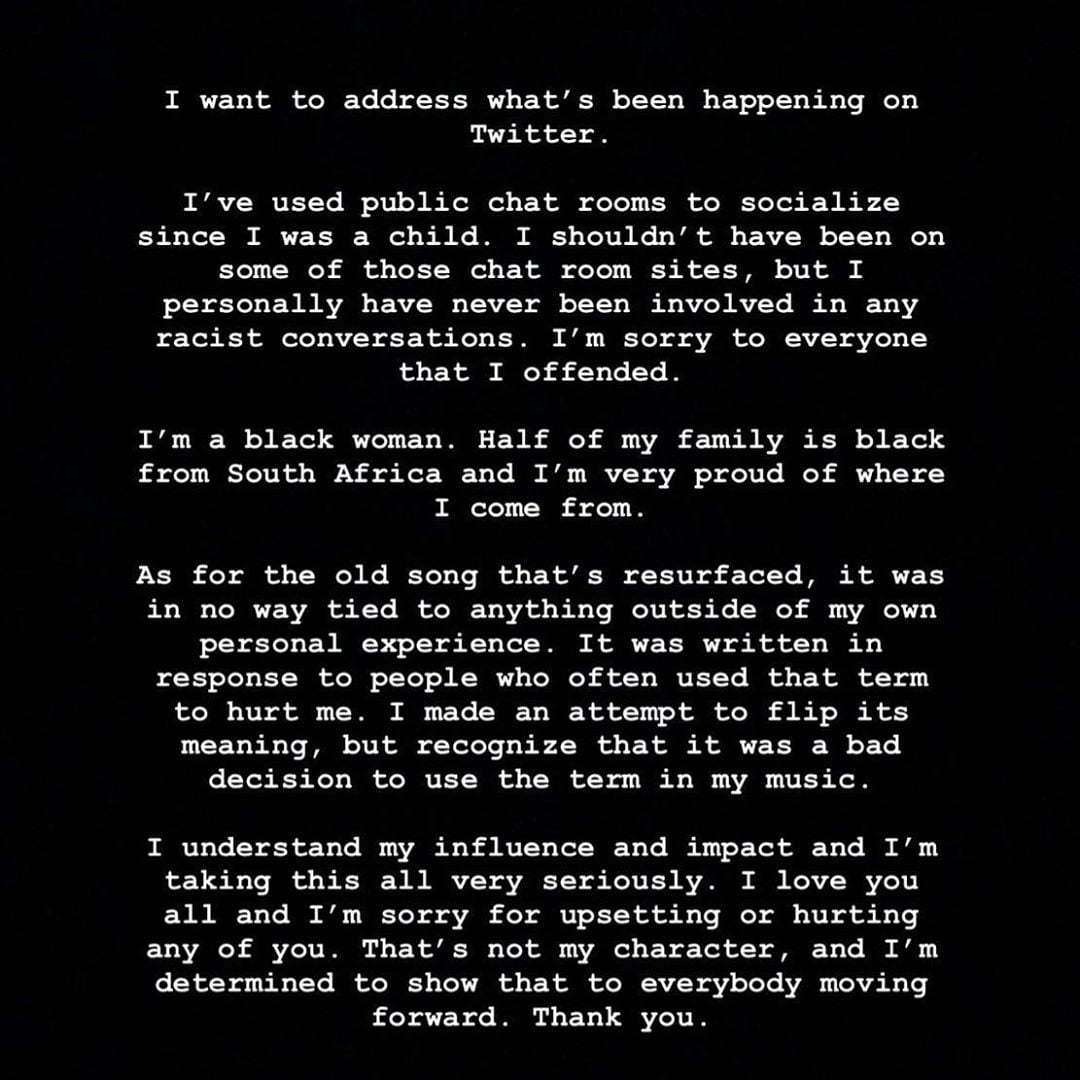 Do you think it’s over for the #DojaCatIsOverParty, or has the rapper only made it worse by admitting that her initial apology was manufactured and offering an explanation for everything she did?