Tekashi 6ix9ine went on a tirade against Billboard while accusing them of manipulating the chart to favor Ariana Grande and Justine Bieber.

While its no secret that Billboard has been under scrutiny over its charts, this is perhaps the first time we’ve seen an artiste outright called them out. Since dropping his new single “Gooba,” Tekashi 6ix9ine has been racking up views on YouTube and streams on major streaming services like Apple Music and Spotify. Because of that, he’s expected to debut at No.s 1 on Billboard Hot 100 chart next week, but seems Ariana Grande and Justin Bieber are on the verge of taking the top spot with their charity single, “Stuck With U.”

In a video rant posted on Instagram, 69 not only accused Billboard of chart manipulation to deny him the No. 1 spot but also of doing something illegal in the process. Billboard is also selling “Stuck With U” CDs signed by both Ariana Grande and Justine Bieber, which some folks say gives the pop stars a competitive edge.

@billboard explain this to the millions of artist who never got #1 because you guys play favorites.

For a very limited time, you can get a #STUCKWITHU CD signed by @ArianaGrande and @ justinbieber. https://t.co/jrEqMbQpGO

Tekashi 6ix9ine did a survey asking fans if they would snitch.

According to 6ix9ine, he did right by himself, but he is now trying to figure out what is over 19.2 million Instagram followers would do if they were in his position. Associate to the King of New York and popular hip hop commentator DJ Akademiks has been blessed with the results of a recent survey the rapper held on his Instagram Stories. Surprisingly for many, the numbers did not reflect the hate he received during his time under oath back in October.

The exact question asked by 6ix9ine goes as follows: “If they kidnapped you, stole from you, slept with your baby moms, threatened your mom, stole millions from you, caught on the phone trying to kill you, would you Snitch or Do Jail Time?

Akademiks gave a more realistic breakdown of the two options 6ix9ine was faced with, “A. SNITCHING n come home to make millions and be labeled as a RAT for life.

B. Accept that u choose to be in that situation, you participated and sent homies to do crimes which helped out u n the gang and according to the Skreet codes under no circumstances is telling ok so you gladly take 60 years n go away a “real n*gga”??” 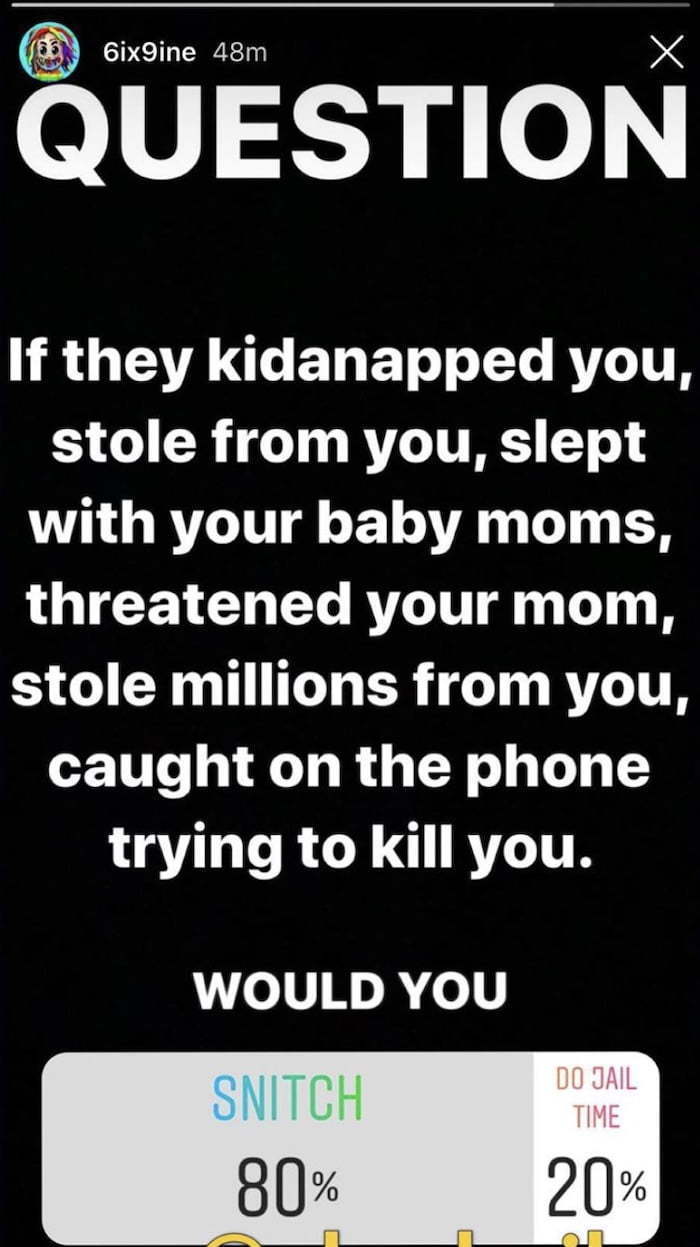 80% of the responders felt that they too would Snitch if they were in the same situation. The remaining 20% voiced the reasons for their answers in the comment sections below his post. Many of the comments centered around his continued glorification of the acts of snitching, even in his new track “GOOBA.” Ever since his compassionate release approximately a month ago, Tekashi has regularly embraced his decision to rat out members of the Nine Trey Bloods gang by sharing his funny 3D images.

Many persons feel that the rapper is simply using the recent survey as a way to manipulate his fans. What are your thoughts on this?

Also, what side of the fence are you on, would you be spending time in jail or securing yourself as Tekashi did?