For years fans have been wondering what happened between Lil Boose and Webbie, who were once very close friends and have collaborated on a number of hits over the years. Then suddenly, they became estranged, leaving a lot of unanswered questions. Boosie Badazz is finally giving his side of the story after Webbie called him out in the comments on a post made by YFN Lucci.

The two men regularly supported each other on projects through the 2000s, making them a killer combination on projects such as Ghetto Stories and other Tril Entertainment releases. However, the two men seemed to have reverted to taking jabs at each other on social media and in songs, something the fans are clearly upset about. However, both Boosie and Webbie have mentioned that they are not beefing with each other, which further adds to the confusion about the friendship they share.

It seems today was Webbie’s day to insert himself in the comment sections of posts from other rappers. While nothing is wrong with chiming in on a post, Webbie’s comments seem to leave a lot to the imagination.

The Tril Entertainment man commented below one YFN Lucci’s most recent uploads, which captured himself and Boosie. 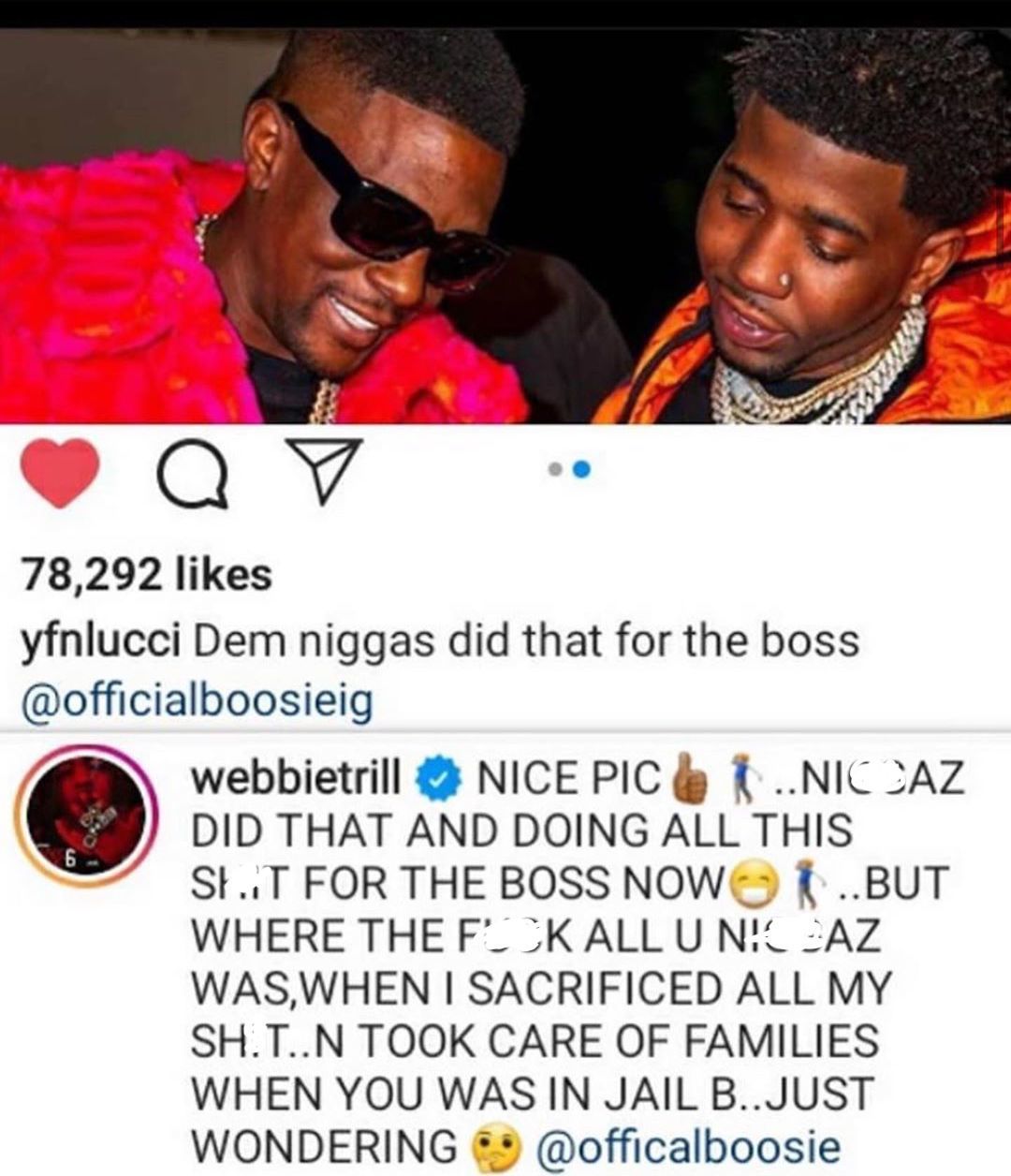 He wrote, “Nice pic. N***az did that and doing all this sh*t for the boss now,” he wrote before asking, “But where the f**k all u n***az was, when I sarificed all my sh*t.. N tok care of families when you was in jail B … Just wondering @officialboosie?”

Boosie Badazz responded to the comment saying that Webbie, who was supposed to be his closest confidant, never put any money on his books or visited him in prison. “You took care my family that’s a bold face lie,” Boosie wrote. “You screamed my name but you ‘never’ gave Ms Connie nothing bra, never put nothing on my books. You never wrote me a letter. You never tried to come visit me n u ain’t even a felon SMHstill I come home trying to help you.”

“U coulda call me ni**a smh truth is you NEVER sent my mother a ‘dollar’ n Y’all had FREE BOOSIE concerts all over she neva got a dime SMH you lying bra,” Boosie continues.

Just a day ago, Webbie posted a throwback image of himself and Boosie Badazz, while asking fans to tag 1,000,000 people for the pair to do a joint album. The post seemed to preach a sense of unity between the two men, which further solidifies that there is no bad blood between the two. In light of this, were the jabs really aimed at Lucci?

Webbie has been on a really positive run as of late and seems to spread the energy wherever he can. He stopped by Lil Duval’s page to help the comedian blast Charlamagne Tha God for what seemed to be negative comments surrounding a hypothetical fight between Mike Tyson and Tyson Fury.

Perhaps its time for Boosie Badazz and Webbie to hash out their differences and make hits again.