Yo Gotti still got a crush on Angela Simmons and he’s letting her know.

True love never fades, but when that love is constantly fleeing, it takes a true suitor to remain persistent. Yo Gotti is the essence of persistence when it comes to the apple of his eyes, Angela Simmons. Rev Run’s daughter decided today was as good as any to send some positive energy into the world. She took to Instagram to share a couple of images of herself in a pink and yellow 2 piece bathing suit before filling the caption with some reassuring words.

Angela Simmons shared a body-positive post on the Gram where she wrote, “She’s not perfect, her weight fluctuates, she has her days when she’s not sure … she doesn’t have a 6 pack.” She counters this with some truly inspiring lines, which should provide guidance for a lot of ladies struggling with body confidence. She continues, “Throughout this all she’s learned to love herself unconditionally.”

The 32-year-old businesswoman who heads Pastry Footwear alongside her sister received an enormous amount of support for her bold post.

She’s not perfect , her weight fluctuates, she has her days when she’s not sure … she doesn’t have a 6 pack …. Throughout this all she’s learned to love herself unconditionally… because if she didn’t who would ? She is me . And I am her … My strength is rooted deeper than the surface . I want to encourage you to love your body. Wherever you stand with it . It’s not easy . But it’s worth it. You are worth it. You don’t have to be what anyone( society) tells you to be. You can be YOU freely. There’s nothing more beautiful than a confident woman ! Built not Bought #BNB #DoWhatMakesYouHappy #WalkingInMyPurpose @purpose_app ?

One opinion that stood out among the almost 7000 other comments was that of Memphis rapper Mario Sentell Giden Mims, better known as Yo Gotti. He praised her with a smooth, “I think u perfect,” before topping it off with a heart emoji.

This was not the first shot fired by Yo Gotti, as a matter of fact, he has confessed his love for the fairer Simmons during interviews and even saved a couple of bars just for her on his 2016 hit single “Down In The DM.” 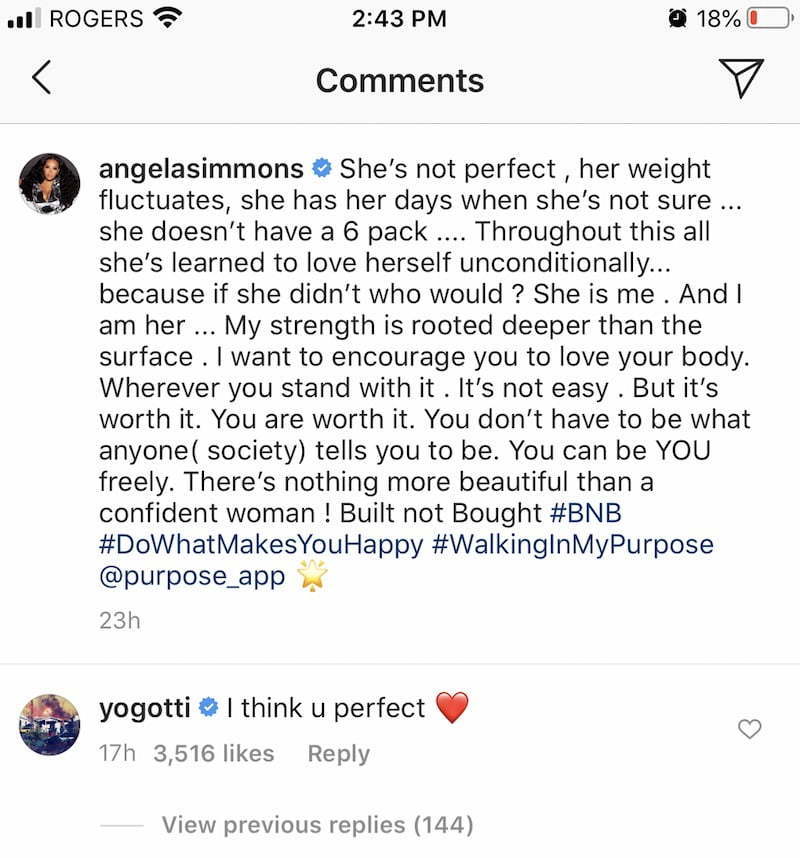 It is an extraordinary thing when you know you have found love, but the 38-year-old is at that age where stability is most important. Do you think Angela will ever give him the time of day? After all, we’re sure he has slid into her DM quite a number of times.