Meek Mill’s parenting skills are under the microscope after he shared a video of his son eating bugs for a $1000 cash incentive.

It is said that kids should listen to their parents, especially when it comes to what they eat, but we would totally be on young Rihmeek’s side if he refused this time. Meek Mill dared his son to eat a handful of four crickets! Now before your stomach starts doing backflips, bear in mind that there was an incentive — $1,000 if Rihmeek completed the feat. Yep, that’s $250 a pop!

With more than 900 species of the insect in existence, crickets are said to be a great source of protein. Around 2 billion people worldwide consume the bugs, with many in Asian countries such as Cambodia, Laos, Thailand, and Vietnam, commonly eat the critters as a snack after deep-frying them. Cricket flour has become an increasingly popular alternative to wheat. According to the United Nations, crickets could be critical in feeding the growing population of the planet while being less damaging to the environment. So maybe Meek was onto something? 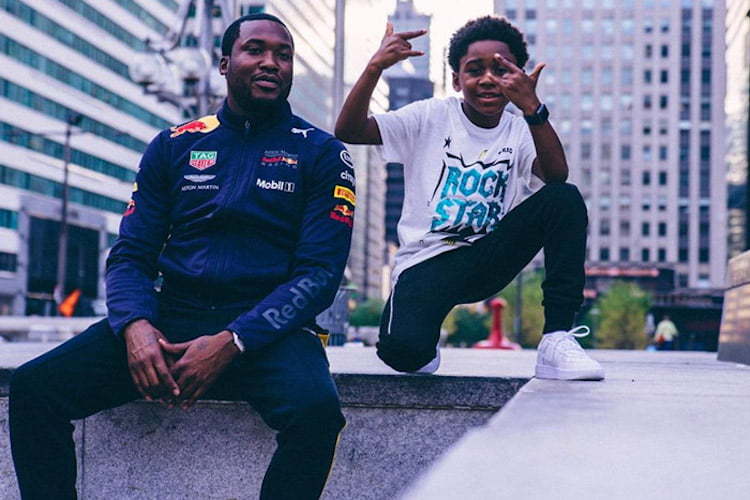 “The whole world’s in your hand. I’ll give you $1,000 if you eat ‘em,” Meek says in the 5-second clip which he posted on Instagram. “Do it. Let me see your tongue.” Rihmeek, who is wearing a sweatshirt from Meek’s girlfriend’s label, Milano Di Rouge, crunches away on the crickets, opening his mouth to show his dad, who audibly expresses his disgust.

With another baby on the way, we hope Meek doesn’t try to get the newborn to eat weird and wonderful things as well! Milan Harris is carrying the “Going Bad” rapper’s second child, and the pair finally confirmed their relationship on social media this Valentine’s Day. The expectant mom posted a pic of the pair chilling on a couch with the cheeky caption, “Ima tell my grandkids that ‘we started out as close friends.’”

#PressPlay: #MeekMill challenges his son to eat crickets for $1000 ?? Would y'all do it #Roommates?!