DaBaby is in the dog house or is at risk of losing his baby mama, MeMe.

While DaBaby is busy portraying a family man on social media, his girlfriend MeMe is calling him the “#1 capper” on the internet. On Tuesday, she went on a rant on Instagram, accusing the “Suge” rapper of impregnating another woman. Just last week, the rapper and his baby mama and daughter flew via a private jet to Miami for Superbowl weekend, where he performed at several shows. Fast forward a week later, and their relationship is on the rocks after she went through his phone and found some text messages.

MeMe didn’t just reveal that her man has another baby on the way by another woman, but she also released the incriminating text messaging between DaBaby and his alleged new baby mama. “And speaking the truth does not mean I am not a GOD FEARING WOMAN, this is why we are here today,” MeMe wrote in response to some criticism from some of the rapper’s fans. “Never be afraid to speak about what is right and what’s wrong.” 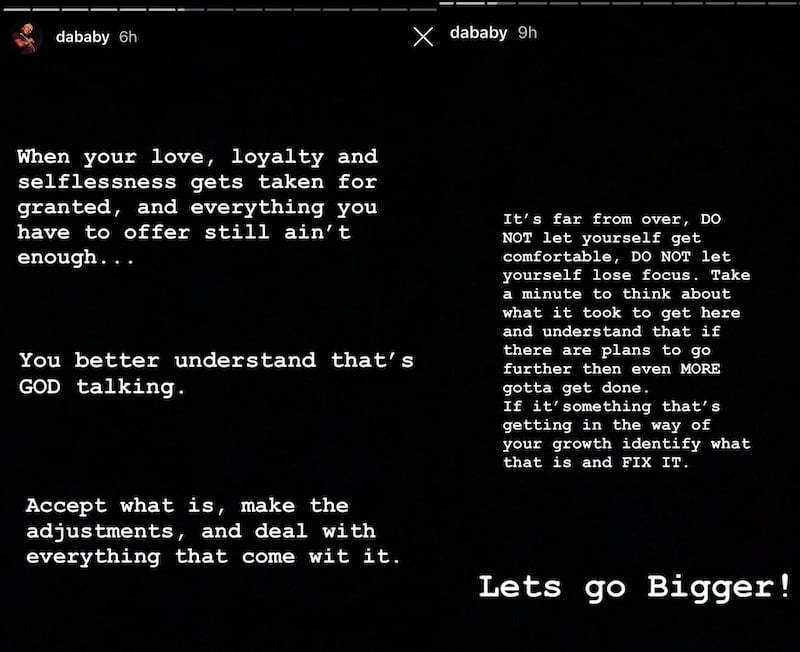 In a video clip posted on his IG, DaBaby says he is refraining from responding in a negative way that might affect his baby girl negatively. “When your love, loyalty and selflessness gets taken for granted, and everything you have to offer still ain’t enough,” the Charlotte rapper wrote on IG Story. “You better understand that’s GOD talking. Accept what is, make the adjustments, and deal with everything that come wit it.”

#PressPlay: #DaBaby's baby mama #Meme is putting him on blast and alleging that another woman is pregnant with his child ? she claims "Your favorite rapper is the number one capper"

#PressPlay: #DaBaby responds to the mother of his child alleging he has a baby on the way with another woman (SWIPE)