Tory Lanez now says his life is in danger after declaring war with Interscope Records.

Daystar Peterson, professionally known as Tory Lanez, dropped a shocker on Instagram. The Canadian rapper hit out at his own label, Interscope, stoking up controversy with some wild claims. The Brampton native threatened to expose the label for something – we are yet to find out what it is. “If y’all don’t stop playing w/me, I’ma expose what’s really going on in that f*cking building,” he shared. The comments elicited an immediate reaction from fans who wanted to know if all was okay.

During a chat with DJ EFN and N.O.R.E the Drink Champs, the decade-old rapper had much to share on the release of the Chixtape 5 album. In a rare moment of tell-it-all, the 27-year-old revealed that he will move away from Interscope on completion of his 12-month contract. He went further to castigate the label for having no part to play in the development of the new album. 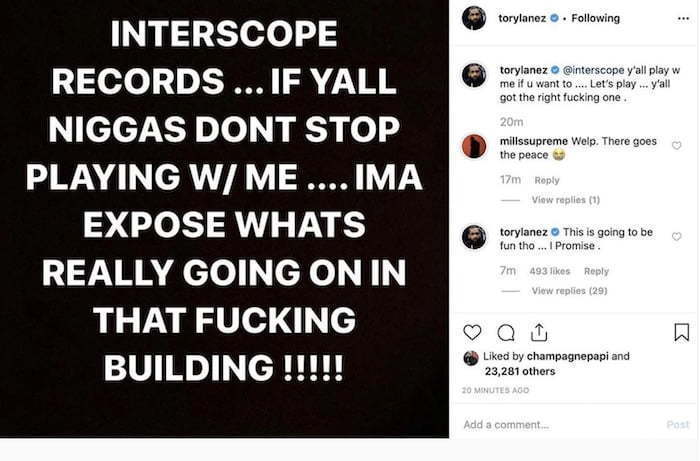 N.O.R.E was taken aback, given the long-held opinion that all was well between the two parties. Tory immediately dismissed that assertion, “I’m doing a great job with me, but we gon’ do that here, we gon’ save that for the next Drink Champs.”

The “Say It” the rapper continued, “I’m with a great team of people.” After which, he began naming people who helped him as he progressed. N.O.R.E briefly interrupted, wondering if he might’ve forgotten to mention the role played by the label in clearing samples. Tory then interjected that he did it alone. He went on to correct that Interscope, in its entirety, is not bad. He actually thinks it’s great. The Ontario emcee considers himself self-sufficient and prefers to be directly involved in his career evolution.

In a new message posted on his IG recently, Tory Lanez hinted that he feels his life is in danger after going on a rant against Interscope. “To my fellow artist if anything happens to me in any part of this process,” Lanez wrote. “I did it all for my upcoming artist to be smarter with these deals and to be in a better position with ya’ll families. And to be aware of the dangers EVEN WHEN THE BUSINESS IS RIGHT!”

Say a prayer in the comment section for #torylanez …