Tank is clowning Charlamagne Tha God for his vow to go down on Tekashi 6ix9ine.

A disturbing video recently resurfaced on social media from a year ago of Charlamagne Tha God saying he would give Tekashi 6ix9ine fellatio if the rapper managed to beat his racketeering and firearms case. Though the radio personality evidently did not give his statement much thought, it is now coming back to bite him in the rear end. Charlamagne Tha God previously dragged R&B singer Tank for his own controversial statements on Angela Yee’s “Lip Service” podcast about performing oral sex on the same sex. While Tank defended his argument, stating that he believes a man who experiments with the act once or twice and then decides that it’s not for him, is not necessarily a gay man. Others, like Charlamagne believed the statement to be absurd and publicly denounced Tank’s opinion. 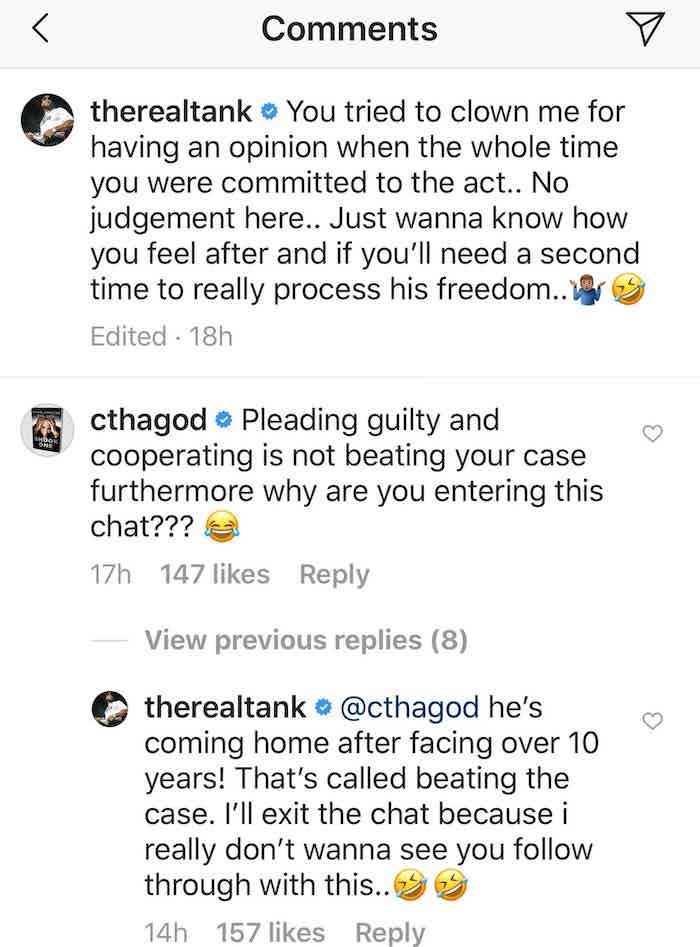 Now the tables have quickly turned. In the timely video now making the rounds online, Charlamagne is heard saying, “If Tekashi 6ix9ine beats this case, I’ll s**k his d**k. You dont even have to ask me sh*t,” he says. Tank used the opportunity to clown Charlamagne for his comments. Taking to social media, the singer posted a comment for the incriminating video of Charlamagne Tha God in an Instagram post.

“@cthagod just don’t do it twice,” the post said with a series of laughing emojis. In the caption, Tank said, “You tried to clown me for having an opinion when the whole time you were committed to the act… No judgement here… Just wanna know how you feel after and if you’ll need a second time to really process his freedom,” the singer wrote. Charlamagne was prompt in his unconvincing response which said, “Pleading guilty and cooperating is not beating your case furthermore why are you entering this chat?” he wrote back.

Several fans have been jokingly holding the radio personality to his word, telling him that he better come through if Tekashi 6ix9ine becomes a free man. While we don’t anticipate that Charlamagne will honor his word, that does not discount the hilarity of the idea or the reactions that have been ensued.

It was sarcasm big fella.

Tekashi 6ix9ine is currently in his sentence hearing in Manhattan Federal Court. Do you think he would take Charlamagne up on his offer?

You tried to clown me for having an opinion when the whole time you were committed to the act.. No judgement here.. Just wanna know how you feel after and if you’ll need a second time to really process his freedom..??????