It’s not often that we see New York rappers Nicki Minaj and Cardi B agreeing on something, but Instagram united the top female hip-hop artistes this week when they announced their plans to remove Instagram “Likes” from the app. Nicki Minaj took to Instagram Live to express her discontent with the possibility of the signature feature of the app becoming obsolete. “Do not say something is for self-esteem when it’s for pocketing more money. Do not use those terms,” Minaj said in the viral video. Nicki is particularly upset that the end game seems to be that all the sponsored posts that many, many users could previously benefit from will now be monopolized by Instagram. 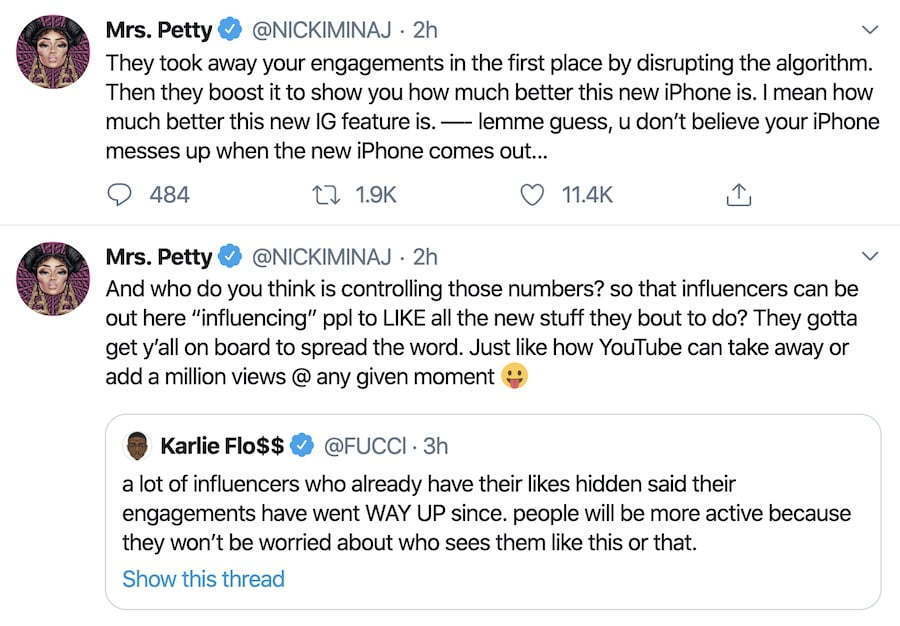 “They don’t want you to go off on the side, forming all sorts of businesses and being able to say ‘I get this amount of likes’ and charging brands. They want you to have to pay them.” Nicki said about Instagram. “Now those companies instead of going to you, they will have to go and pay Instagram so they can have a post that says ‘Sponsored,’ they can have advertisement, and they’re paying for that now instead of to you, to Instagram.” Nicki also believes this has been in the pipeline for some time now, and that’s the reason app developers previously changed up the order of posts from a chronological arrangement.

Cardi B also posted a video of herself discussing the new highly debatable decision by Instagram execs. The “Clout” rapper said she believes Instagram took a nasty turn when the app gave users the ability to like and reply to comments. While she agrees that something needs to be done to address the features conducive to cyberbullying and the broader issue of how online interaction can affect one’s “self-esteem.”

Cardi says, “I really feel it’s the way that the comments have been changed in these few years. I feel like people been saying the most weirdest sh*t, been starting the craziest arguments… all because of comments because they want to get to the top, they want to get the most reactions,” she continued. “The comments affect more than the likes.”

A majority of Instagram users are displeased with the decision to remove “likes” from the social media app. The testing has already begun in US markets where some users are unable to view how many times others double tapped their post. As for how this will affect the income for business users, we’ll just have to wait and see.

This is just my opinion….I mean what makes you feel more insecure getting no likes or people constantly giving opinions about you ,your life and topics??what you think IG should do ?