Koffee has copped another star in her crown with a full feature in the November 2019 issue of Essence magazine.

Jamaica’s youngest superstar, whose real name is Mikayla Simpson, made the pages of the Afrocentric American magazine in an article titled “Meet Koffee, Reggae’s Next Big Ting,” written by Kevin L. Clark which was also published on the magazine’s website on Monday. The article describes the Spanish Town native as leading the pack of a wave of new talent, which is bringing a ‘jolt of energy to reggae culture.’ It traces Koffee’s ascension to stardom, including her 2017 song “Legend,” which is a tribute to Usain Bolt, her endorsements by Cocoa Tea, Chronixx, and Protoje and the explosion of “Toast” which made former First Couple Barack and Michelle Obama’s summer playlist.

Essence noted that what it describes as her gratitude-fueled sound ‘is further proof she’s driving modern roots reggae forward into the history books’, even as it recognized that the industry’s acceptance of Koffee has been gratifying in part, because of how infrequently women have been ‘championed inside and outside of the business.’ 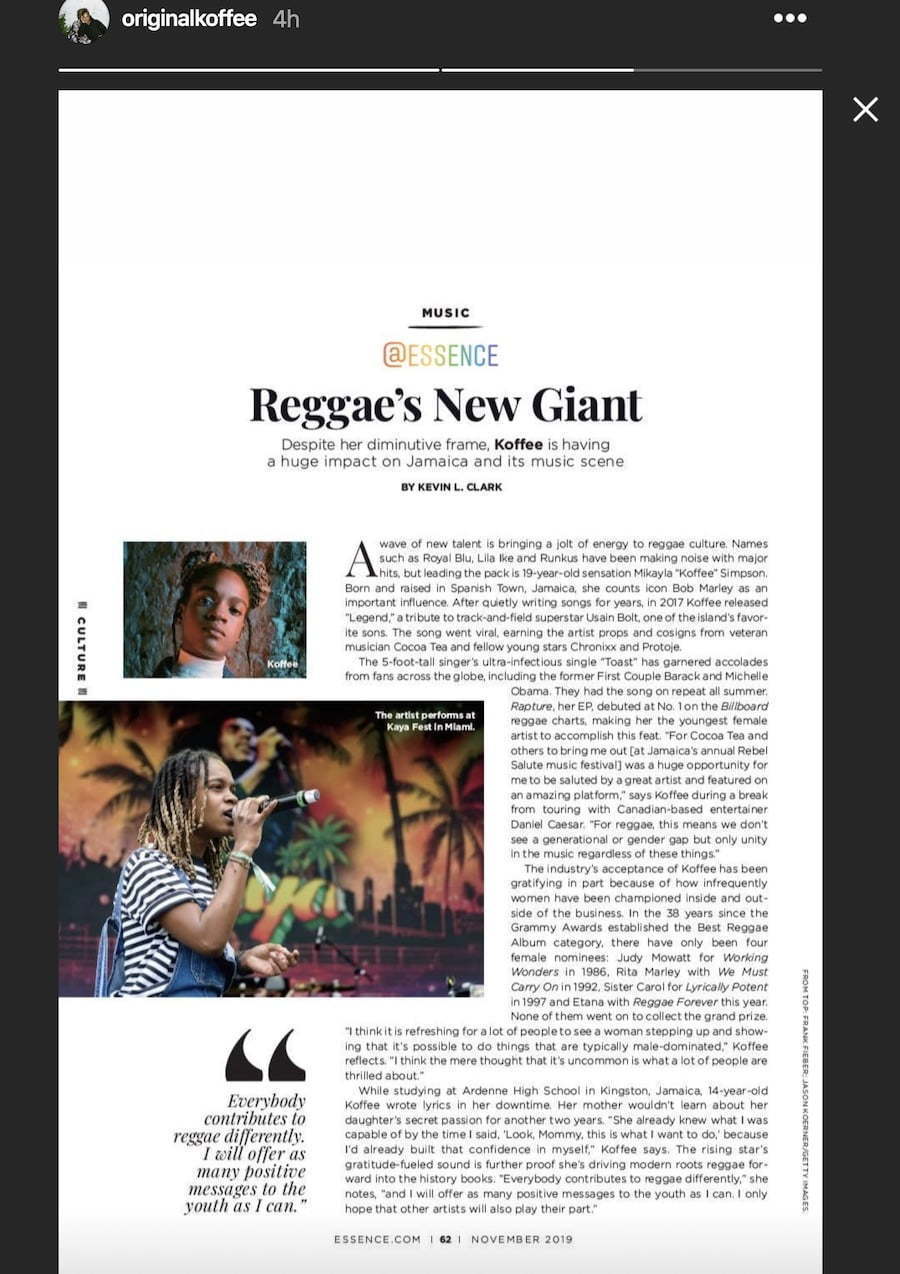 “In the 38 years since the Grammy Awards established the Best Reggae Album category, there have only been four female nominees: Judy Mowatt for Working Wonders in 1986, Rita Marley with We Must Carry On in 1992, Sister Carol for Lyrically Potent in 1997 and Etana with Reggae Forever this year,” the author noted, adding that neither of the women went on to collect the grand prize.

Koffee shared the link to the story on her Facebook page, and her fans are loving it. Some referred to her as saving the future of Reggae with class, culture, and style, while others declared her the “Crown Princess of our time.”

“Now I want them to give you a Grammy; you deserve every bit of it. Love your positive vibes,” Nikki Wiltshire said.

Most fans were in slight disagreement to essence’s reference to Koffee as the “Next Big Ting,” declaring that she had already stamped her authority as ‘Reggae’s Big Ting’.

One fan called on the Ardenne High School old girl to keep the momentum going by releasing more songs.

“Koffee, we need the new tune right now! What’s up? Can’t make the thing die out. I love all your songs and your personality, much respects.

The high-riding 19-year-old will perform this Sunday in the UK at the Arena Birmingham on King Edward Road, alongside Chronixx and his Zinc Fence Redemption Band.

The show is being promoted by Luv One Luv All Promotions and will span five hours beginning at 6:00 pm at the arena, which has a capacity to hold 15,800 people.