Amid a full roster of activities for the summer, reggae luminary Bugle has been immersed in the studio working on his third studio album.

Titled ‘Picture Perfect’, the twenty track anthology will be presented as a double-disc showcasing the musical dichotomy of one of the industry’s most prolific recording artiste and songwriters. Divided into two ten-track sets, disc one titled ‘Picture’ exudes a blend of contemporary and traditional reggae while disc two aptly named ‘Perfect’ adapts that perfect dancehall vibe infused with those heavy drums and bassline as Bugle flexes his thought-provoking lyricism in poetry.

When quizzed as to what fans can expect with this latest body of work, Bugle intimated that “I’ve spent the last nine months meticulously working on this album with some of the most respected professionals in the business. While I could have recorded the entire album in one week, my reason for the lengthy timeline is, I want when someone download or puts my album into their player they can listen to the entire compilation and appreciate the effort that went into constructing every song and know their hard-earned money was well spent. I don’t make music only to entertain but also as a tool to educate and inspire, I hope the fans will truly appreciate this latest offering as we strive to preserve the authentic dancehall and reggae culture.”

‘Picture Perfect’ is a masterfully crafted compendium and arguably Bugle’s best work yet in spite of the stellar effort on previous offerings Anointed (2014) and Be Yourself (2017). The project boasts a solid cast featuring Jada Kingdom, Kabaka Pyramid, Little Lion Sound (based in Switzerland) Noah Powa, Shuga, New York-based Alexander and Gramps Morgan. Even more impressive is the plethora of production virtuosos contribution to the compilation among them, Grammy Award-winning father and son duo of Erroll and Shane Brown. Erroll Brown has worked with a cadre of reggae luminaries and was the chief engineer for Bob Marley (1978-1981), while Shane who also boasts an impressive résumé was instrumental in Shaggy’s diamond selling Grammy-winning album Hot Shots. 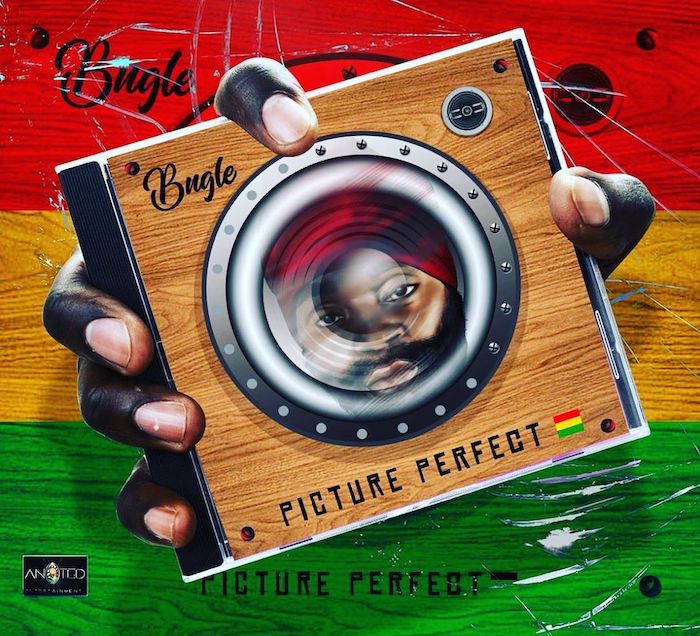 “I am from the old school but what I’ve heard from Bugle’s album have made me a fan, a lot of positive energy and vibes which hardly exist these days. This album gets an A in my book. Great job,” Erroll Brown said.

Similar sentiments were echoed by Shane Brown, “Bugle is an artiste that I’ve admired his unique sound for years but listening to tracks from his new album have shown me how much he has grown and is ready to take his career to another level. This album shows maturity, longevity and all it needs is a chance to be heard. I’m delighted to have been a part this album as it’s one for the Jamaican music history books well-done bro!!”

Sharing executive producer credits with Bugle, Grammy Award winner Gramps Morgan disclosed that he has been a fan of the ‘Rasta Party’ hitmaker for several years,

“I’ve always wanted to work with Bugle his lyrics and his flow are next to none. Many times in our industry a lot of artistes don’t get the attention they are due, I have been such a huge fan for many years watching him write songs for other artistes, watching his performances. Over the past three years, I finally got a chance to tune into him as a person, but more as an artiste, he is truly incredible and the way he flows and puts together words, makes him one of the best in this industry. I am truly proud of this album and how it has turned out. Can’t wait for the world to know who this young man is even more. His history, where he is presently as an artiste, and where he’s going to take this music for the future, to the entire world.”

Set for release on August 16, the two-disc set will also be available for pre-order on Friday, August 2 via all major digital platforms. According to the New-York based, VP Records, who is tasked with distribution duties upon official release, the project will be available in both digital and physical formats.