Urban Islandz reported last week that Buju Banton has decided that he will not be performing his famous anti-gay anthem at his concert last weekend. We’re told that he will not be performing the single going forward including on all the remaining dates of his “Long Walk To Freedom” Tour. “Boom Bye Bye” was not played at any of Buju’s parties over the past weekend, including at the after party at Mas Camp. Disc jockeys were warned not to play the song, which all of them complied.

Ina new statement sent to Urban Islandz, Buju Banton says he has removed the song from all platformed he has control over and will not be performing it at his upcoming shows.

“In recent days there has been a great deal of press coverage about the song ‘Boom Bye Bye’ from my past which I long ago stopped performing and removed from any platform that I control or have influence over,” Buju said. “I recognize that the song has caused much pain to listeners, as well as to my fans, my family and myself. After all the adversity we’ve been through I am determined to put this song in the past and continue moving forward as an artist and as a man.” 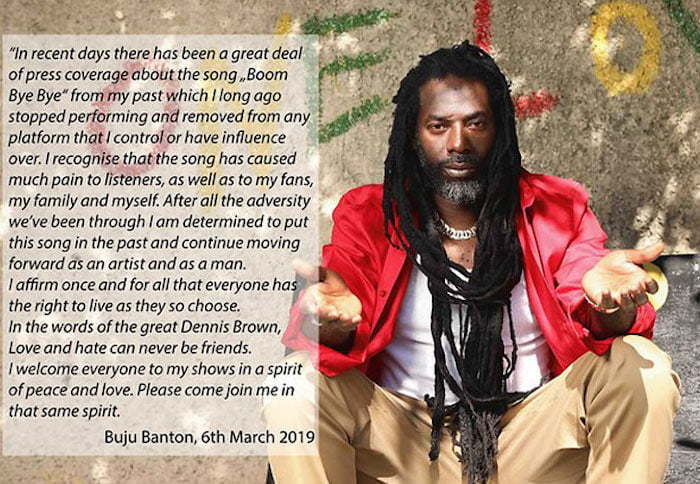 “I affirm once and for all that everyone has the right to live as they so choose,” the singer continues. “In the words of the great Dennis Brown, ‘Love and hate can never be friends.’ I welcome everyone to my shows in a spirit of peace and love. Please come join me in that same spirit.”

The statement was issued after a gay rights group in Germany started pressuring Summerjam’s promoters to remove Buju from the show. The gay rights group, KLuST (Kölner Lesben- und Schwulentag e.V.), has now backed down from its demands amidst Buju Banton’s new statement.