Cardi B says its time to take a break off Instagram amidst a nasty beef with Azealia Bank.

Cardi B and Azealia Banks have been locked in a heated back-and-forth on social media. Both female rappers have been calling each others names and just when it seems like there is no end to the melee that’s when Cardi B deleted her Instagram account and private her Twitter page to focus on her pregnancy, her man, and her music.

The feud started when the Harlem rapper did an interview on The Breakfast Club lambasting the former Love and Hip Hop star. According to Azealia Banks, Cardi B sudden rise to fame is solely because hip hop lowered the bar for her and that is bad for black female culture. The “Bodak Yellow” rapper and her fans begged to differ. She also called Cardi illiterate and a “caricature” of a black woman. She didn’t mince her words when describing her thoughts on the Invasion of Privacy rapper 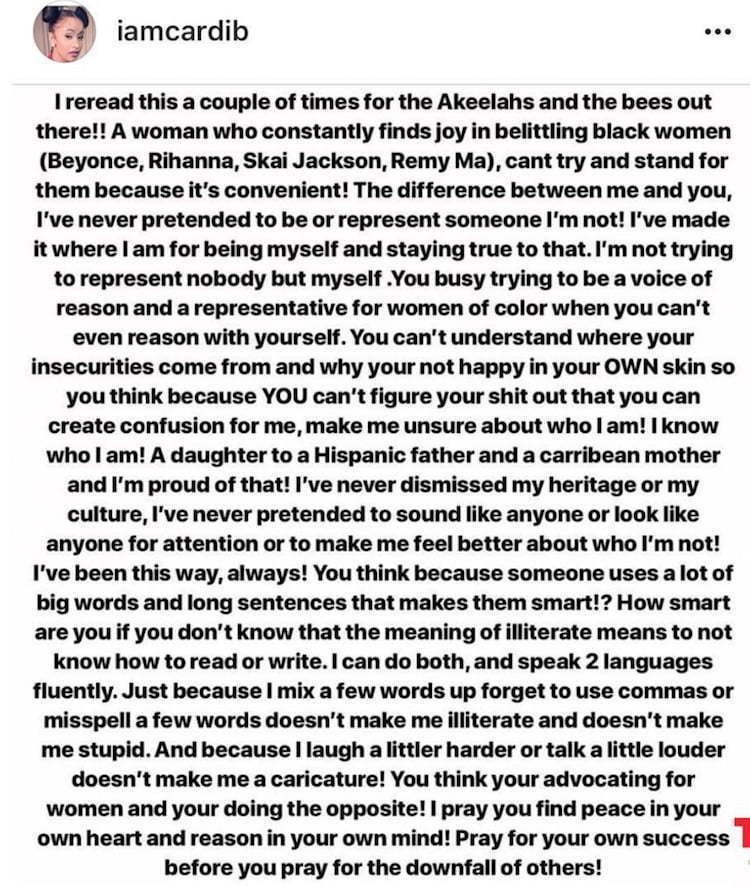 Last night Cardi B posted a lengthy response and then decided it’s time to turn her attention elsewhere. She made it clear that she never tried to be any different from who she is since the beginning of her career. “I re-read this a couple times for the Akeelahs and the bees out there!!” Cardi wrote. “A woman who constantly find joy in belittling black women (Beyonce, Rihanna, Skai Jackson, Remy Ma), can;t try and stand for them because it’s convenient! The difference between me and you. I’ve never pretended to be or represent someone I’m not! I’ve made it where I am for being myself.”