Who knew that Diddy was an Unruly fan too. Popcaan gets a cosign from the rap mogul on Instagram yesterday.

The Unruly boss posted a pic of himself on his Instagram accounts on Friday. “1time fi the unruly fans them #unruly,” the deejay wrote. Diddy commented on the pic with a gang sign emoji. You can see the exchange below. Popcaan has been having a great year and next month he has a chance to create history by winning the MOBO award for Best Reggae Artist three years in a row. He won that award for the last two years and is the hot favorite to win it again this year.

Poppy is a close friend of Drake who has beef with Diddy. The two rap titans got into a fight in 2014 outside Liv nightclub in Miami. Sources say Diddy confronted Drake over the beat for his single “0 – 100.” The Bad Boy rapper first recorded a song on the beat that was never released and then the producer gave Drake the beat for “0 – 100.” Drizzy ended up having to go to the ER at the night of the fight for a dislocated shoulder. The two have since made peace but then the Toronto rapper took more shots at Diddy earlier this year when he hooked up with Jennifer Lopez. 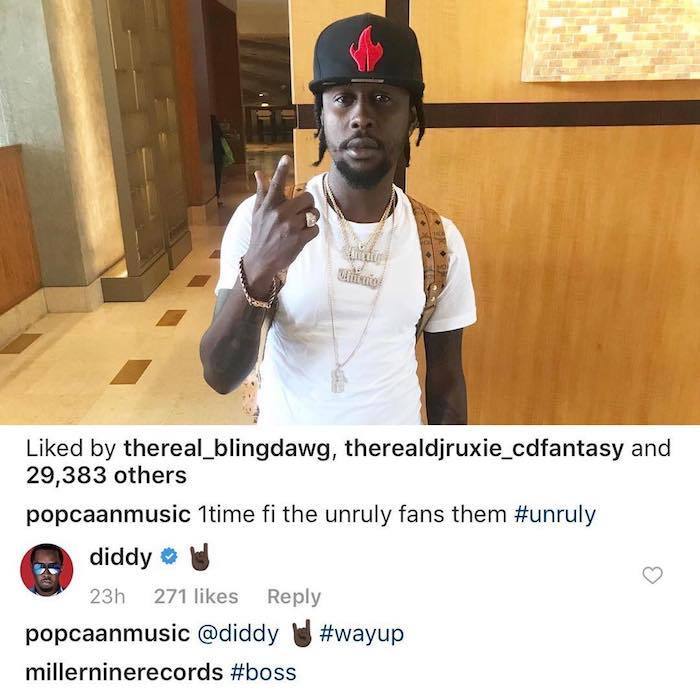 Popcaan has a new single out now, “Can’t Box,” where he responded to recent rumors that he was boxed in the face recently by rival deejay Mavado. The “Stray Dog” deejay is eyeing some major investment in his native parish St. Thomas after recently leading a protest in the parish over bad roads. He recently met with St Thomas, Member of Parliament for Eastern St Thomas Dr Fenton Ferguson to discuss ways to uplift the parish and they both agreed that more investment is needed.