Cardi B and Offset have broken up just a few days after her ex-boyfriend was released from jail.

The duo was once relationship goals for their fans but that’s not the case right now. On Saturday night, both Cardi B and Offset took shots at each other on Instagram Stories while the “Bodak Yellow” rapper went a step further to announced that she is single. Bardi posted a photo of herself on Instagram showing the peace sign. “Peace nikka,” she wrote in the caption. The Migos rapper followed suit a short time later by posting the peace emoji on his Snapchat.

The folks on Twitter already have their theory and and all fingers are pointing to Cardi B ex-boyfriend Tommy who they claimed was released from prison three days ago. The Bronx rapper once said that she would help her ex get back on his feet when he leaves jail, so perhaps she is making good on that promise and that is not sitting well with Offset whom she has been dating since last year. There were no signs that their relationship was on the rocks so this bit of news came as a shocker to a lot of their fans and perhaps even their celebrity peers. 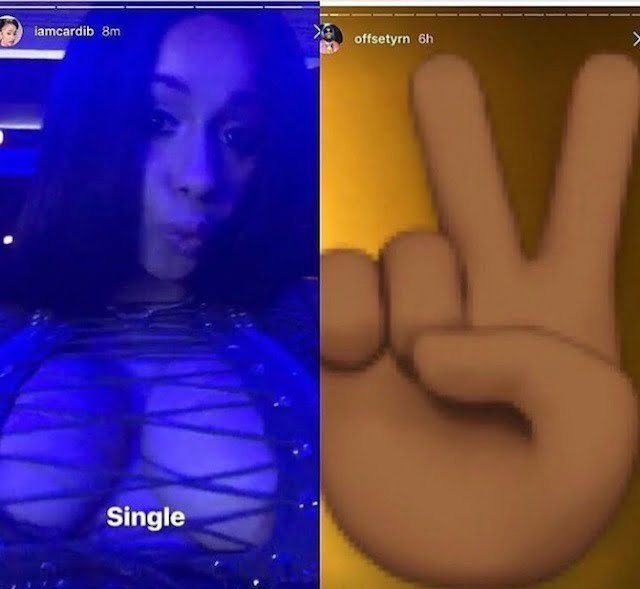 While she was a cast member on Love and Hip Hop New York, Cardi B and her relationship with Tommy was her main storyline. They two broke up after he went to prison but it seems like there is no love lost. While Cardi has been making a lot of posts on Instagram, Offset has been radio silent aside from the peace emoji. He even still has several photos of her up which means there could be a chance that they could patch things up. “Sometimes you gotta do sh*t the old you would do,” she wrote on IG. “So mfers know not to play with the NEW you!”