The new book “The Autobiography of Gucci Mane” is now out and the Atlanta rapper has an excerpt in there that touched on Nicki Minaj feud with Lil Kim.

Gucci Mane is winning right now and this year is perhaps one of the best years of his career. He was released from prison last year May and was fortunate enough to get off probation last month. Gucci has never been in better shape physically and mentally for the past year and he is spilling it all in his new book.

One of the biggest takeaways from his biography was when he spoke about the first time that he met Nicki Minaj. “I hopped out of the van and was making my way toward the venue when I saw this pretty girl get off Wayne’s bus and start running toward us,” the book reads. “She was small, no taller than five-two, but right away I saw a big personality. ‘Gucci! I always wanted to meet you,’ she said. ‘I’m Nicki, I’m here with Young Money.'”

Gucci then revealed how Nicki Minaj ran up to him and started talking about being a big fan of his. She even spoke about the remix to his single “Freaky Gurl” and asked him why would he put Lil’ Kim on there. “She told me she was a fan and had even put out her own remix to ‘Freaky Gurl,'” Gucci added. ‘Why would you put a b*tch from Brooklyn on there, though?’ she asked, referring to Lil Kim. ‘I know you got people in Queens. You supposed to have a b*tch from Queens on there.’ For her to know my connections to Queens, she really must be a fan, I thought. The girl was cool. We exchanged numbers and I went inside to perform.” 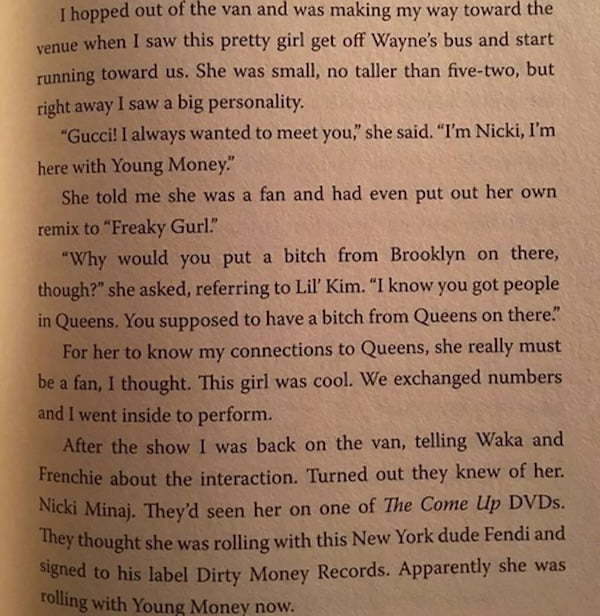 Seems that incident is from about 2009 when Nicki Minaj just signed with Young Money and was on the come up.