Migos’ Offset is threatening to put his hands on Hot 97 radio host Ebro Darden over some Cardi B rumors.

On Thursday, Ebro tweeted out a fake story claiming that Cardi B dumped Offset because he is charging her $250,000 for a feature on her song. For one, Cardi B didn’t break up with Offset but I think the Migos rapper is upset because Ebro is questioning whether or not he is a big enough artist to be charging 250 grand for a guest verse. “Wait!!…This is not true! Funny on so many levels tho! An Offset verse is $250K??” the radio host wrote.

When Offset got word of Ebro’s tweet, he let it be known that he will be at Hot 97 Summer Jam where he hopes to meet him in person to put a beat down on him. “Ima b at Summer jam too ima see if the same joke funny when I see u s*cker stop trying my craft ni**a like u tryna say I’m trash or sum I’ll beat yo old azz,” the Atlanta rapper tweeted. On a side note, if Offset is charging $250,000 for a guest feature then just how much Quavo is charging. Quavo has been on almost everyone album this year, he is literally everywhere and is even dominating Spotify. 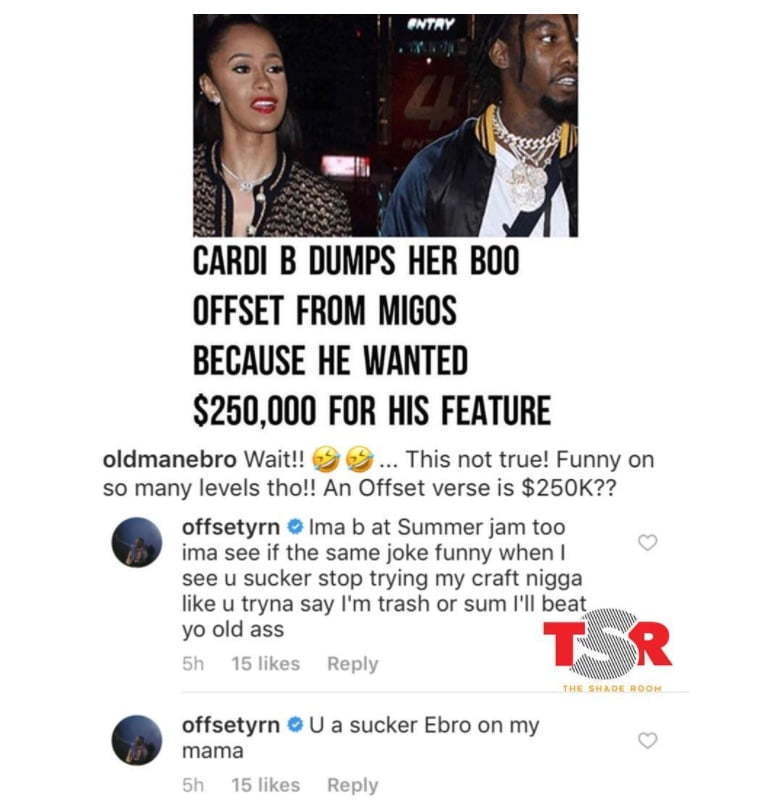 Ebro posted a screenshot from the exchange telling Offset to not be so sensitive and its all love. Sunday should be interesting when Offset turn up to perform at Summer Jam.