The Game is one of a few celebrities that bought a pair of the infamous $495 sneakers by Lonzo Ball.

The Big Baller Brand sneakers are currently available for sale online and retail for a whopping $495 per pair. The hefty price tag sparked a lot of outcry among some folks on Twitter who said they will not be buying any. The Game bought four pairs of the Lonzo ZO2 sneakers for his son and his friends. In a lengthy Twitter post he explained that he is supporting his culture and one of his own instead of dishing out big bucks for other brands like Gucci and Jordan.

“Just bought my son @hvrlemtaylor & a few of his friends the “Lonzo @zo Ball’s” #Z02 kicks just on the pure fact that I’ve spent over a million dollars, sh*t probably more on Nike’s, Jordan’s & other big name sneaker brands in my lifetime so why not support a family brand & a rising stars shoe….. Funny how ni**as will go & buy Gucci flip flops for $300-400 with no complaints but then complain & b**ch when a kid & his family is making a name for themselves & trying to grow their own brand….. I also think about all these $500 duplicate Jordans ni**as out here going broke & dying over just trying to keep up with Jones’s…. While MJ, as much as I love & support him & his legacy ain’t really ever did much for the black community other then tax our motha****in’ ass for the same shoes over & over as well as charge these kids parents hella money to get in these camps. & again, no hate… MJ is MJ but today I chose to support @Zo & his family…. f*** how anybody feel about it… keep making memes if that’s all yo broke hatin ass can do….. maybe sometimes, people need to delete the meme app off they phone & start creating their own legacy instead of picking apart someone else’s….. I will also be buying 10 more pair of @Zo’s kicks for 10 kids who’s parents can’t afford them….. on behalf of myself & @therobinhoodproject.”

The Game even showed us his receipt for his purchase. 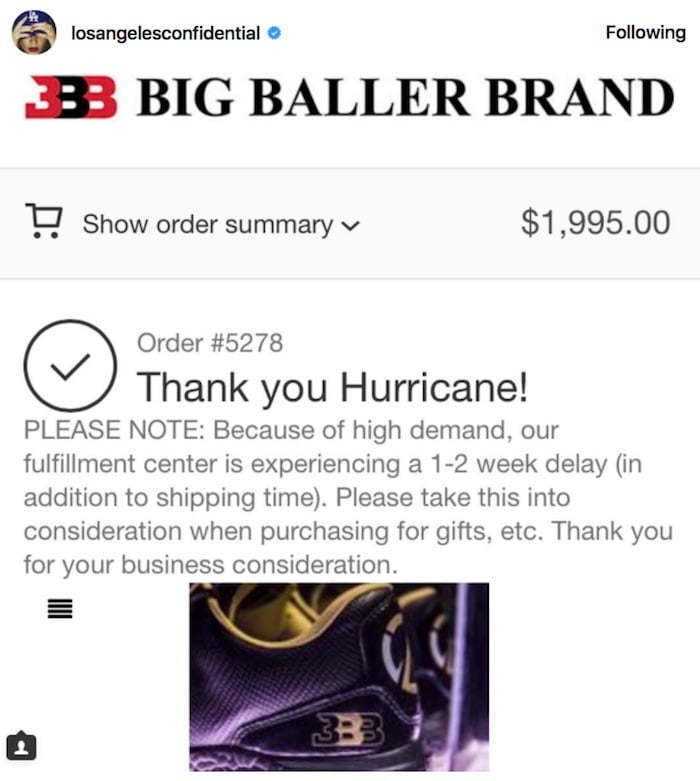