The Love and Hip Hop Hollywood star introduced his new girlfriend on Instagram on Valentin’s Day. Safaree pulled all the stops on Valentine’s Day for the Instagram model. He posted a video of a UHaul trick full of red balloons, 400 of them to be exact. Some folks are not happy for the rapper/reality star and are making some disparaging comments about his new boo.

Star Divine posted a photo of herself and Safaree on Tuesday and captioned it “Hey Big Head, In Real Life, #HappyValentinesDay.” Nicki Minaj fans immediately went on the attack going after her looks. By the way, I think she is a very beautiful female.

These were some of the comments from some of the haters “Can’t believe u dating that tranny… Dats literally the most ugliest person you dated and that’s on chucky wife … VERY HIDEOUS… Ya she finitely looks like a rat she ain’t nicki foreal foreal.” These are just some of the nasty comments posted by some followers on social media and it gets worst than that. 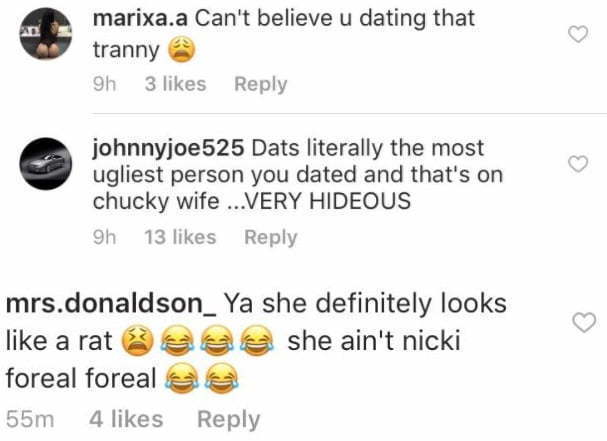 I am not a big fan of Safaree’s music but I want this kid to win so badly and sometimes am not even approved of some of his social media outbursts, but I must say to Safaree, continue to do you and be happy. Your new chick is banging. There are also some news that she will be joining the cast of Love and Hip Hop so let’s hope that their relationship will last the cruel world of reality TV.

After Safaree’s new girlfriend Star Divine went public with their relationship, Meek Mill posted this meme on his profile seemingly taking a jab. 2017 is the year of the petty.