The OVO emcee made the announcement on Wednesday on the OVO blog that he would be postponing shows in Philadelphia, Newark and Toronto. Drizzy injured his ankle while performing last month, but despite trying to power through the tour, his doctors told him to take a break.

“WE ARE OVER 50 SHOWS IN AND I HAVE DONE EVERYTHING TO POWER THROUGH MY RECENT ANKLE INJURY AND LEAVE IT ALL OUT THERE ON THE STAGE EVERY NIGHT,” Drake wrote. “I HATE TO BE TOLD I CAN’T DO SOMETHING, BUT UNDER DOCTOR’S ORDERS TO ALLOW ME TIME TO RECUPERATE, I AM BEING FORCED TO POSTPONE THE INTENSE THREE SHOWS IN A ROW IN CITIES WHICH AVE ONLY EVER SHOWN ME UNCONDITIONAL SUPPORT.”

“I FEEL LIKE I AM LETTING MY FANS IN THESE CITIES DOWN,” he added. “I ONLY WANT TO GIVE YOU THE BEST SHOW YOU DESERVE, I PROMISE – I WILL MAKE IT UP TO YOU. THANK YOU FOR YOUR UNDERSTANDING AND I CAN’T WAIT TO SEE YOU ALL AGAIN WITH NEW MUSIC AND A STRONGER ANKLE.”

Drake also confirmed that more tour dates would have been postponed but he decided to go against his doctors orders and fulfill some of them. 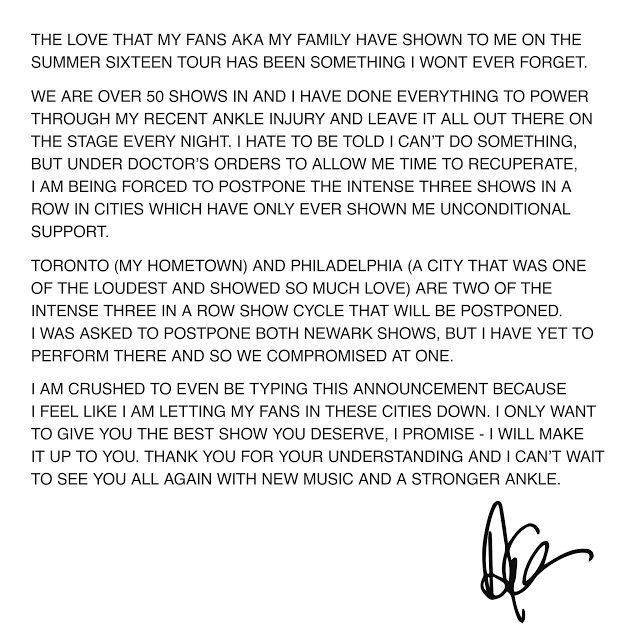