AGSelectPR Kingston, Tuesday, June 12th 2012: After a shocking elimination on Mission Catwalk episode 11 where contestants were required to design a mini collection for a fashionista headed to the 2012 Olympic Games in London, Belize’s own Rebecca Strim returns to the Caribbean fashion reality series as the ‘wild card’

This second shot at the win is “very exciting and humbling” says the 19 year-old Belmopan resident who won four of the show’s 11 challenges and placed safe in three episodes.

“We wanted to see another collection so we had past contestants Kerin Scott (Ne Sera), Janel Jolly (Jae Jolly) and Rebecca show at CFW 2012 and ultimately we chose Rebecca as the wild card,” says Mission Catwalk host and executive producer Keneea Linton-George who along with regular panelists Novia McDonald-Whyte associate editor lifestyle and social content at the Jamaica Observer and menswear designer Carlton Brown have judged the season two presentations.

Her CFW debut was made possible due in part to local sponsors Belize Bank and Belize Telemedia Limited (BTL).

For Rebecca, her experience in Jamaica means that the hard work is paying off.

“From the creation to the collection to fitting the models to seeing the looks out on the runway and getting to walk with my finale piece was a very, very rewarding experience.”

The winner of Mission Catwalk season two will receive JMD$500,000 courtesy of National Commercial Bank of Jamaica (NCB) towards their clothing line, industrial sewing equipment valued at JMD$200,000 courtesy of singer Jamaica, a contract to sell the designs at SOHO boutique, a six-page fashion editorial in Ocean Style Magazine, a scholarship to pursue fashion program at London College of Fashion, an apprenticeship with Master Savile Row Tailor Andrew Ramroop and the opportunity to show at London Fashion Week in September.

The other designers contending for those prizes are Ryan Chan (Ryan Chan Designs) of Trinidad and Tobago, Gregory Williams (HOD by Gregory Williams) and Crystal Powell (Crystal Christina) both of Jamaica

Tune in on Tuesday June 12 to see Rebecca’s CFW presentation as well as that of the other contenders. Mission Catwalk airs at 8:30 PM on Television Jamaica and streams live at televisionjamaica.com. The series can also be viewed on local stations in Barbados, Belize, Grenada, Guyana and Trinidad and Tobago. Check local listings for schedule information. 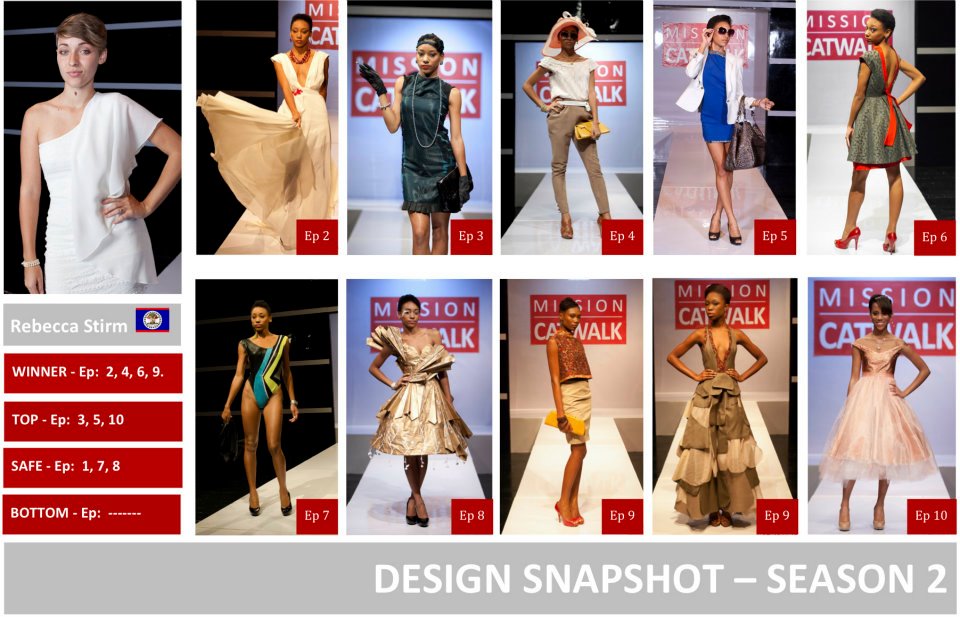