Nicki Minaj is on the cover of Complex Magazine upcoming issue. The Pink Friday rapper opens up about her future goal, her quest to being an individual artistes and getting fight from other female rappers in the industry.

Nicki Minaj is gearing up to release her sophomore album Pink Friday: Roman Reloaded, which hit stores on April 3rd. She will then embarked on a worldwide tour starting this summer.

See some excerpts from the interview below.

When you’re constantly exceeding your own expectations, how do you set new goals?
Doing the Super Bowl with Madonna doesn’t really change Nicki Minaj’s personal goals. My goal right now is still to put out Pink Friday: Roman Reloaded, sell five million copies eventually, and tour every country in the world. That’s what I’ve been working toward. So while the world is talking about, “Oh my God, I can’t believe Nicki Minaj was at the Super Bowl!” I’m mixing and mastering my music. In my scheme of things it’s way bigger.

Because those surprises can’t replace the things you want to achieve by yourself?
Because my goal the whole time has been for people to see me as a stand-alone artist. I came out with Young Money, the biggest hip-hop label in the world at that time. And then it was, “How do I branch away from Lil Wayne?” One of my biggest records was with Drake, “Moment 4 Life.” Even with the Super Bowl, it’s Madonna’s moment. I’m just sharing in that moment. It’s not Nicki Minaj’s moment. Nicki Minaj at the Grammys—that’s my moment. I’ve just been constantly on this quest to stand alone.

I always got a kick out of the endless debates over who was managing you. I’ve known you through three sets of managers [Deb Antney, Puffy and James Cruz, and Hip Hop Since 1978] and in every case, it was always clear that…
Little do they know, I manage myself. 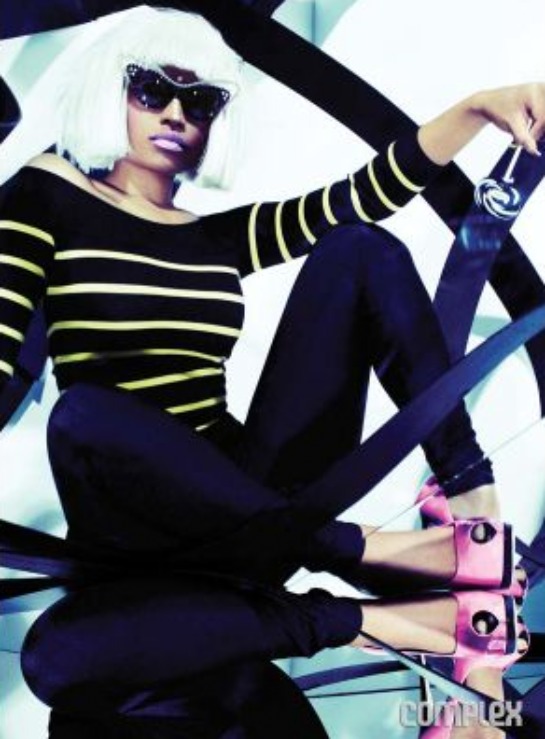 Did you always know what you wanted your brand to be?
I didn’t know who I was as an artist. I knew who I was as a person. My morals and everything, they’re still the same. And then I took it upon myself to create this artist, Nicki Minaj. I wanted to do what a label cannot do. Now, labels are going to think they can re-create this. [Laughs.] But they can’t.

They’re definitely trying. It’s the Nicki Effect. Since the success of Pink Friday you must see that the industry has changed. Corporations see a female rapper who has more visibility and more income streams than her male counterparts. So new female artists are viable, and that creates a more competitive atmosphere.
When I first got in, doing freestyles and mixtapes, I did a song called “Still I Rise.” I was talking about how so many women were pulling me down and ripping me apart. I said, “Every time a door opens for me/That means you just got a better opportunity to do you/Better understand these labels look at numbers and statistics/If I win, you win, it’s just logistics.”

So in order for my theory to be proven right, I have to open doors for women. The up-and-coming females who wanted to get in—when you guys are coming out and dissing me, and all that negativity….They saw me as a threat instead of seeing me as “she’s going to open the door for us.” I never came into what I’m doing dissing anyone. I gave everyone their props and it’s unfortunate that people felt intimidated and attacked me. Then it became a ripple effect. But now it’s all love. My music is a way for me to have fun. Sometimes I’ll say things and I’ll laugh. But it’s all love. I’m in a great place and I just wish everybody the best.