Poor RiRi was scared while being yelled at.

Bajan popstar turn actress Rihanna has opened up about the tough military style training for her role in the upcoming film, Battleship.

“We worked with real military people, you know, people in the Navy, people who have fought in Iraq before. They pretty much came and drilled me. This one man, Donald, he pretty much drilled me, yelled at me, cursed me, ‘Ow!’ Made me do pushups.”

“I really want to say, ‘F*ck you’ right back, but then he probably would have thrown me through the window! I was so scared I just stood there and looked at him like, ‘I swear I’m going to get it right, I swear, I swear, I swear I’ll be good.’” 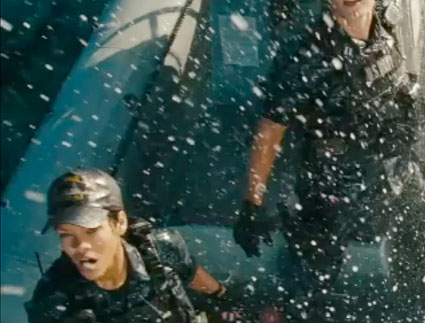 Rihanna said director Peter Berg was “super enthusiastic” about the film which helped her to feel better since she was initially very nervous on set. “I didn’t know what I was doing, where I was going, why.”

“He’s crazy. He really is, and so spontaneous, so nothing is memorised, it’s a real reaction every time,” she said of Berg. “I couldn’t ask for a better director to work with on my first film. Who warns you that you have to jump into the middle of the ocean and pretend that you’re drowning? Who does that? Him? Never.”

Rihanna was spotted arriving at the airport on Sunday (Aug 14) for a flight to Europe. See flix below