Lil Kim draw for a Nicki Minaj look a like for her video Black Friday, and that impersonator is speaking up about the role.

According to Stacy Callendar, it was only when Lil Kim laid eyes on her, that the idea came together.

In an interview with The Urban Daily, Callendar revealed that it was only by chance that she appeared in the video at all after she was requested by her friend, an “upcoming rapper”, Big Grand.

“When she said ‘Where my girls at?’ [My friend] was like ‘Go!’ I’m like, No I’m not even dressed and he was like ‘yo Kim!’ and pointed at me. She was like ‘Come here’ and said ‘You’re so pretty, I love your hair,” she disclosed. 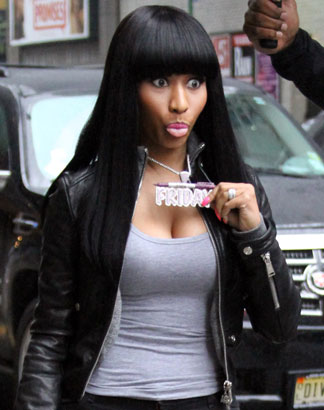 Describing how the Nicki Minaj scene came about, she explained that the video director, Picture Perfect, put the idea forward.

“He was like ‘Yo Kim wants you to do this scene’ and I was like what scene? and he was like ‘the Nicki scene.’ I was like ahh I don’t know. I was real iffy about it because I don’t want to get in between anybody’s beef, because I have no problems with anyone. They’re both talented artist to me. He was like ‘Come on,’so I asked around for opinions from my friends and I got positive opinions from everyone. [So] I actually decided to do it. It was fun. That’s where my acting skills came out.”

The part-time model also confessed that she looks like the ‘Your Love’ hitmaker because she took her picture to the hairdressers for a similar look.

She said: “When I went to the hair salon–I’m not going to lie —I took her picture with me because I liked her hair and the color and cut so you know I wanted that hair. Ever since I got it everyone has been like ‘oh my god you look just like her.’ I guess it’s our nose, cheek bones and the eyes I guess.”