Safaree responds to questions on if he has ever listen to Nicki Minaj music while having getting down in the bedroom.

Safaree Samuels recently made an appearance on Streets 94.5 Atlanta with fellow Love and Hip Hop star Yung Joc. The rapper, whose name has been spinning in the media in recent weeks, dished on some details about his life, relationship, his trip to Jamaica, and fatherhood.

But, one of the moments that stood out was the 40-year old’s response to a lewd question involving his ex-girlfriend, the Queen of Rap, Nicki Minaj.

Choosing questions from a hat, Safaree picks a question that reads, “Have you ever listened to a Nicki Minaj song while having sex?” A surprised Safaree could not bring himself to fully read the question, exclaiming, “What? Who made this up?”

After trying again but to no avail, the rapper passed the question to Joc, the host, to read the question himself. However, he also found it difficult and responded, “What the hell? That’s a good question though.”

Of course, Safaree disagreed completely. “No, no that’s not a good question. That woman is married with a brand new baby. God bless, okay!” he responded. 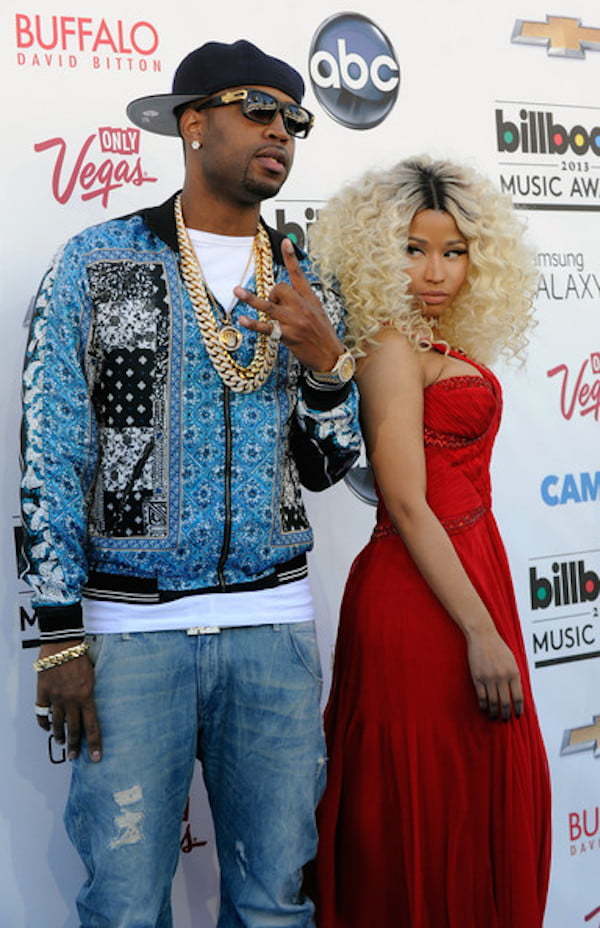 Safaree and Nicki Minaj met in 2002 when she joined a short-lived, New York rap group called ‘Hood$tars’ that Safaree was a part of. The two have a long dating history that started in 2004 and ended in 2016.

The tumultuous relationship included engagement rumors in 2011 when Nicki was spotted flaunting a big diamond ring, but the two did not tie the knot. Nicki Minaj reportedly married Kenneth Petty in 2019, and then Safaree got married to Erica Mena that same year.

Erica and Safaree, after several social media fights and divorce announcements, are currently in the process of officially calling it quits. The couple shares two children, Safire Samuels and Legend Brian Samuels. Legend, born prematurely last month (June), had been in the NICU for a few weeks while Safaree posted pictures and videos from his birthday trip in Jamaica. He has received backlash from the public on social media, with many against him even after he claimed that his estranged wife damaged $50,000 worth of his property last week.

Meanwhile, Nicki seems to be content in her marriage, welcoming her first son in September and taking a break from the industry to spend time with her new family.

The rapper made a comeback in May, releasing her 2009 mixtape “Beam Me Up Scotty” on all platforms, with three additional songs.

The “Pills and Potions” artiste is apparently over her long-time ex and based on Safaree’s response to the question, it’s safe to say that the sentiments are reciprocated.