Mr. Lexx is clapping back at criticism from inside dancehall for trashing DJ Khaled on Twitter.

Despite the backlash Mr. Lexx has been receiving for the past four days, the dancehall veteran is standing by his contentious comments hurled at We The Best Music chief DJ Khaled. On Monday, August 12, the “Full Hundred” deejay made a tweet that has since developed controversy across Jamaica and its entertainment industry. “Every time Khalid come yah a di same artiste dem him use and di song dem nah hit. Kmt yea I said it,” he tweeted. This comment did not sit well with some members of the public and at least two members of the dancehall industry.

Popular selector Bishop Escobar and veteran producer Gussie Clarke defended the Grammy-winning producer, saying he has the right to work with “whomever he chooses, however often he wants.”

Others accuse Mr. Lexx of being “hateful” and “badmind.” One Instagram user said, “Mr. Lex fi admit seh all he wants issa song wid d man,” another expressed, “Just sounds like jealousy,” and another accused, “Mr. Lexx is a hater.” 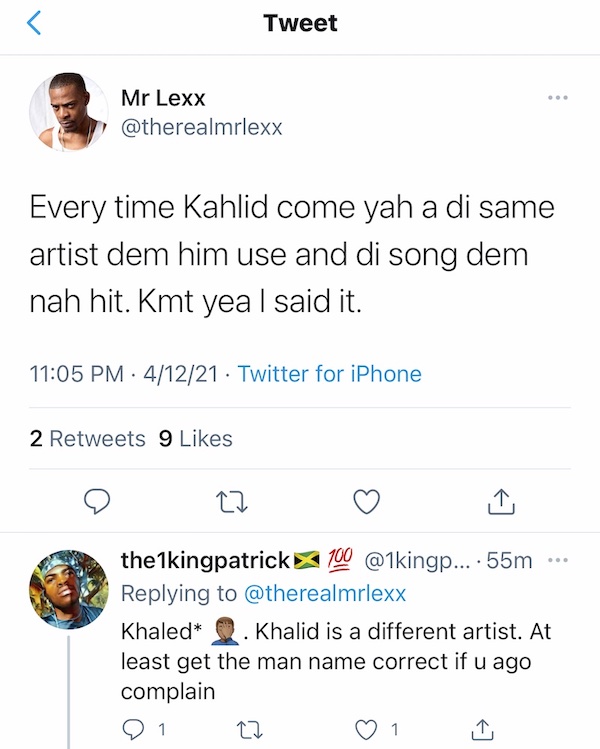 But Mr. Lexx, whose real name is Christopher Palmer, is maintaining that he reserves the right to freely express his opinions, even those that are contrary to popular beliefs.

To these comments, Mr. Lexx responded, “Dung yah suh Anybody weh voice dem opinion is either a Hater or Bad Mind… Daam.”

Dung yah suh Anybody weh voice dem opinion is either a Hater or Bad mind… Daam.

Additionally, the deejay also responded to an article posted by The Star titled “Local music players defend DJ Khaled after Mr Lexx rant.” To this, he said, “Mi never did a rant.. but carry on.”

DJ Khaled had been enjoying his stay in Jamaica over the past few days, constantly keeping the public updated with pictures and videos posted on his page. The producer, who had always expressed gratitude to Jamaica for its part in his rise, has been in “album mode” since he arrived on the island, with his latest update on the album being at 98.2 percent completion. Based on pictures DJ Khaled shared on social media, international artists H.E.R and Migos, as well as local artists Buju Banton, Busy Signal, Bounty Killer, Barrington Levy, Capleton, and Koffee, will be featured on his upcoming album, Khaled Khaled, due later this year.