50 Cent and Tory Lanez roast Paul Pierce for getting fired from ESPN.

If it’s one rapper you can depend on to share his opinion with no filters, it’s 50 Cent. He definitely wasn’t going to miss the opportunity to share his thoughts following the announcement that former NBA superstar Paul Pierce was leaving ESPN following some wild videos that he posted to Instagram over the Easter weekend.

Pierce had social media buzzing following his crazy Friday night (April 2), which from his videos was filled with strippers, lots of booze, and poker games. He shared his experiences through his Instagram Live, which means people from around the world could see his shenanigans. The news that he and ESPN would be parting ways came yesterday, April 5. It was more than likely tied to his wild Friday.

Of course, 50 Cent wasn’t going to waste this trolling opportunity and took to Instagram earlier today, April 6, where he featured a voiceover mocking the Celtic legend. He wrote, “Paul don’t give a f*ck,”. He added, “He said they gonna fire me LOL.” He went on to hilariously narrate the entire short video clip.

Pierce might not be taking it as hard, seeing that his net worth is upwards of US $70 million. In fact, ever confident, he’s already teasing his next move following the split and has hinted that he may join some other media network.

“Big Things coming soon stay tuned make sure u smile #Truthshallsetufree,” he tweeted soon after the reports came out he was done at ESPN. He added, “I can’t lose even when I lose I’m winning.”

Tory Lanez also reacted to the firing, writing, “Damn.. he thought he was me ….. NBA give my man one more chance.” 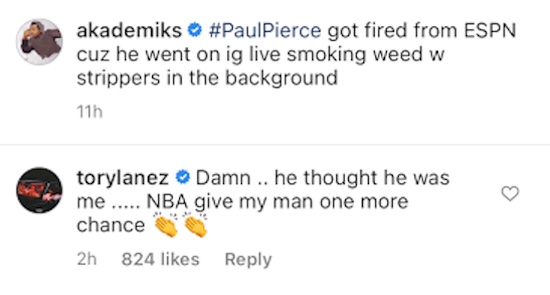 50 wasn’t the only one who found his situation comical, as many internet users took their own jabs at Pierce’s antics. The 43-year-old was named a finalist for the 2021 class to enter the Basketball Hall-of-Fame in March. He’s accustomed to being made fun of by now as he’s usually popping up on social media for all the wrong reasons like when he reportedly received an offer of $250,000 from adult entertainment site Cam Soda to host a basketball analytics show.