Bobby Shmurda will be released from prison any moment now and Quavo will be the man to pick him up in style.

Time is winding down as the much-anticipated release of rapper Bobby Shmurda approaches, and his friends and family make preparation for his return to society after six long years. The rapper is set for conditional release on February 23 from the Clinton Correctional Facility in New York, and much is apace for his comfort and welcome.

A statement released on a verified fan account purportedly made by Shmurda thanked his fans for staying loyal. “My team created this Instagram page after my original page was hacked but thanks to my dedicated fans I manage to get my page verified and also 1 million followers without ever being active on this page. Thank you for remaining loyal and for riding this six year sentence out with me. I love you all and look forward to seeing you soon. Sincerely, Bod Boy bobby ah ahh ahhh,” the note ended by saying.

His friend Quavo says he’ll be picking up the rapper in what he teases to be a celebratory affair, according to Billboard. 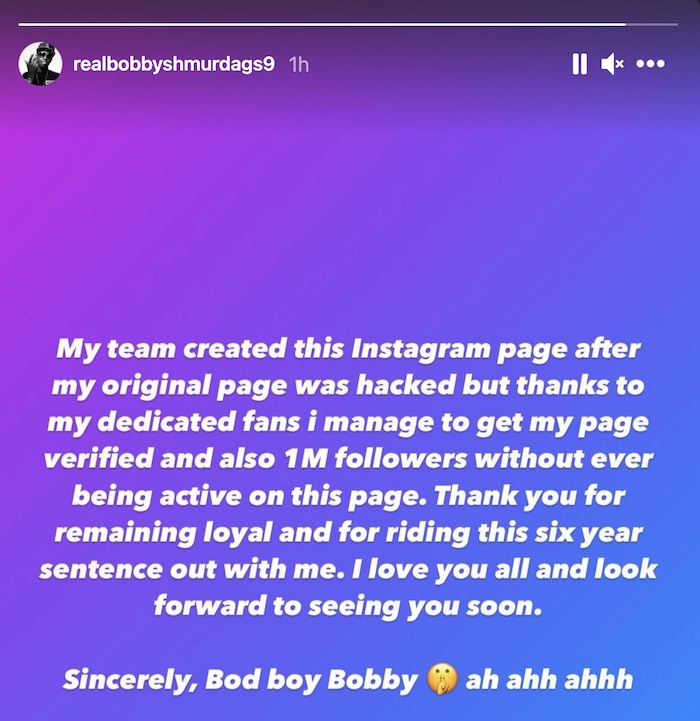 “I’m going to get my guy. I’m personally gonna go pick up Bobby Shmurda. I’m bout to go get him. I’m gonna let him show you how I’m gonna pick him up, yessir,” he said.

Quavo also spoke of Shmurda’s return to hip hop music as he pins high hopes on his friend’s release and future music. “It’s gonna be big,” he quips.

Shmurda was sentenced to seven years in jail after he took a plea deal for 4th degree conspiracy and 2nd degree criminal weapon possession. He was initially arrested in 2014 with several GS9 companions, including rapper Rowdy Rebel, for conspiracy to murder, weapons possession, and reckless endangerment.

His efforts for parole or early release in 2020 due to the Coronavirus pandemic were rejected in 2020. Quavo has been one of the more level headed among rappers, exhibiting a level of maturity and wisdom even more than those older than him. He is known for being a fan of the Brooklyn Drill rap scene and mentoring younger rappers like Pop Smoke, amongst others.