Quando Rondo is denying ever sending any DMs to Lil Durk.

Chicago rapper Quando Rondo has been under fire since the death of King Von, who was murdered outside a hookah lounge in Atlanta in early November. Ever since Von was killed, fans online have been accusing Quando Rondo of being the one responsible and even linked him to the man later arrested for the shooting.

The rapper has incessantly denied any blame, but he has still maintained his gangster persona on his latest single “End of Story” and recent mixtape Before My Time Is Up, which are both new releases since Von’s murder. Recently it was alleged that Quando Rondo has been attempting to squash his beef with Lil Durk, who was a close ally of King Von. It was rumored not too long ago that Durk was the reason that Rondo kept canceling all his shows because the “Laugh Now, Cry Later” rapper allegedly bought out tables at his show.

While that was never confirmed and Rondo has denied that was the cause, even phoning the concert promoter during a Livestream to validate, a new video has surfaced allegedly showing a DM conversation between Quando Rondo and Lil Durk, and it appears the accused rapper is imploring for the chance to speak to Durk and put an end to their feud.

In the messages, Rondo allegedly asks Lil Durk to meet and talk in person or to call him over the phone, so they can work things out and “dead” their beef before it’s too late. The texts from Rondo’s side also appear to claim the beef was costing the rapper money because he couldn’t do shows, and he needed to “feed his people.” Meanwhile, Durk intermittently told Rondo to “stay safe.” 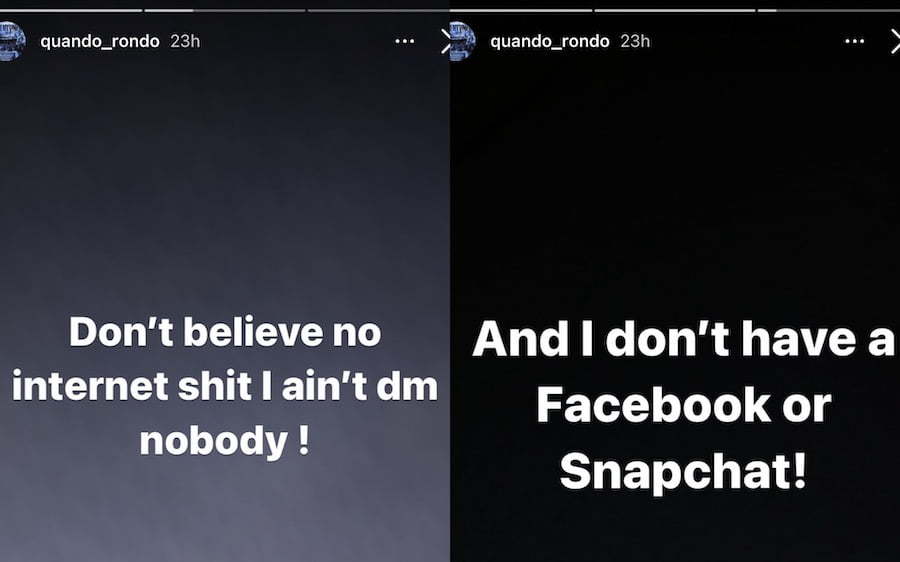 Quando Rondo has since denied that the conversation ever happened, taking to Instagram stories to quell the rumors. “Don’t believe no internet sh*t I ain’t dm nobody,” the rapper wrote. “And I don’t have a Facebook or Snapchat!” Due to the particular nature and context of the messages, not all fans are convinced that they are fake like Quando suggests.

Do you think Lil Durk can validate them?