Drake is praising Lil Wayne for believing in him even when no one else did.

As Drake continues to attain legendary status in hip hop, it is worthwhile remembering that Drizzy was a Canadian actor with a couple of mixtapes until Lil Wayne signed him to Young Money Entertainment. Eleven years later, Drake is still grateful to the “Sucker for Pain” rapper for giving him his big break and paid tribute to him on the ‘gram.

Elliot Wilson, who is the Chief Content Officer of Tidal, posted a video of his interview with Weezy during which the New Orleans artist stated that Drake had always been a knockout, and how honored he is that the “Laugh Now, Cry Later” rapper chose him to represent him. Drizzy was obviously flattered by Wayne’s words and ventured into the comments to express his own praise.

“This man believed in me after so many never called again or just didn’t see it to begin with,” the Six God wrote. “Most selfless artist ever never held any of us back always pushed us forward every single night in people faces 20k packed into an arena and he had a whole set of his show dedicated to introducing us FOR YEARS… all praise and credit due to the [goat].” 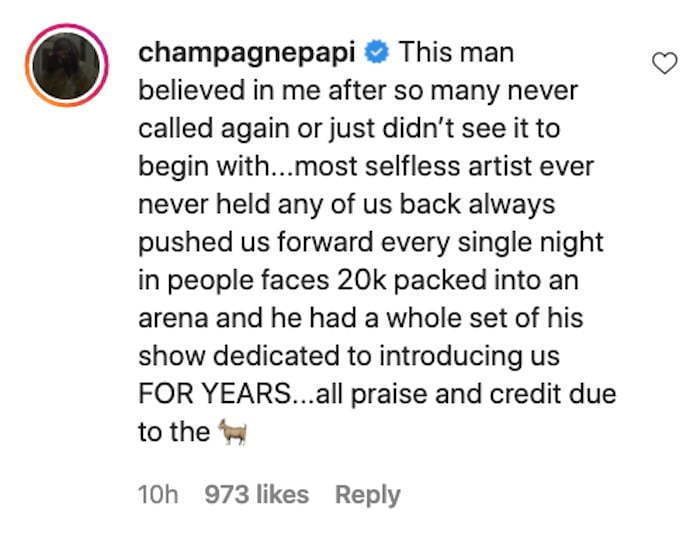 The pair worked together on several tracks in the past, and it is very possible that the musical partnership will continue on Drake’s upcoming sixth studio album. His sound engineer, Noel Cadastre, has said that the album is 90% done, and on Friday, Drake revealed the title as Certified Lover Boy. It is also a possibility that Drizzy may feature on Weezy’s new project — the Grammy Award winner announced during his appearance on UFC Live that he is set to release the third edition in his No Ceilings mixtape series.