Webbie has finally said something about his falling out with Boosie Badazz.

Lil Boosie and Webbie had been giving us classics for nearly a decade and a half. However, somewhere in 2016, something fell off, and the two have not made any music together since then. Badazz recently sat down with Dj Vlad from Vlad TV, to speak on several topics. Vlad, who mentioned that he is a fan of both Boosie Badazz and Webbie, wanted to know if the two rappers had any bad blood between them.

Boosie quickly shot down any ideas of he and his former partner on the tracks beefing. “I ain’t got no beef with Webbie, man, hell naw. I could never beef with Webbie. Hell naw!” he mentioned. 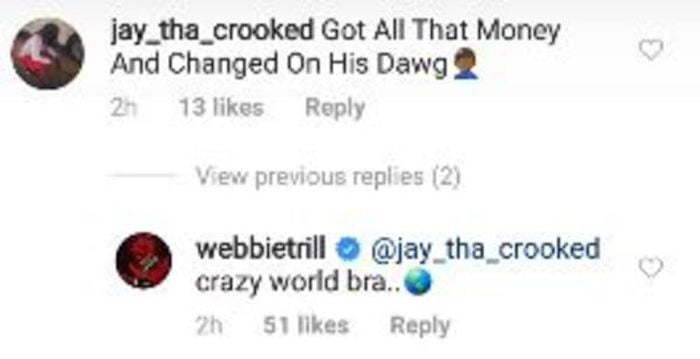 Vlad was curious to know why they had not made any music since 2016. Boosie explained the metrics of both rappers’ thought process in terms of music and their relationship. “It ain’t me dawg, we just don’t see eye to eye on some sh*t,” commented Boosie, “It ain’t me. I still love him, [but] I feel like it ain’t me. That’s my ni**a. I love that ni**a. I been through a lot with that ni**a. I just … I gotta keep going. I’m a train, dawg. I gotta keep on going.”

“We just gotta get on the same page,” sigh Boosie. “When I get pissed off, I get pissed off. But I love that ni**a … I adapted to this new world sh*t. I gotta keep going, Vlad. Hopefully, we get in there, we make some more classics, but every month and a half I’m dropping a classic.”

This was the same sentiment that Boosie shared in another 2017 Vlad interview. He confessed his love for Webbie but mentioned that his longtime collaborator just needs to get back on track. Webbie was spotted in the comments area below a video of Boosie’s recent interview. Webbie wrote, “Crazy world bra,” in response to someone’s comment that money changed Boosie.

Webbie also posted a cryptic message to his IG account that read, “Main U AINT EVEN GOTTA WORRY BOUT DAT B, BEEN TO BUSY COACHIN.”

Webbie has since released another Instagram post confirming that there is no love lost between the two Baton Rouge legends. The post of a photograph of a younger Lil Boosie and Webbie as they performed on stage.

“A1 cents DAY1,” he wrote. “It’s ah negative [world] bra..people enjoy negative energy way more than positive energy ..#coachwebbie IF ME N B WAS FIGHTING ON THIS PIC ..I bet it would get millions of views and likes..but sense it’s another pic of us having a good time ..Enjoying Life.. LETS SEE WHAT IT DOES.. crazy world bra,” wrote Webbie.

Now that we know there is no beef, do you think Boosie and Webbie will ever make music again?