A journalist is coming under fire for showing no remorse after making some disparaging remarks about Beyoncé and JAY-Z’s daughter, Blue Ivy Carter.

Recently on Twitter, two journalists decided to openly discuss their discontent with Blue Ivy’s appearance. One of the writers who is a critic for Vanity Fair, K. Austin Collins incited the conversation when he suggested that Blue Ivy is gonna start looking more like her dad soon. “I have a feeling the jay z face genes are about to really hit Blue Ivy and I feel so sorry for her,” he wrote.

A web editor for Harper’s Bazaar, Violet Lucca, then joined in on the conversation. “They haven’t already?” she replied to the original tweet. The other journalist then suggested that the child would be lucky to “Get the ugly duckling phase done early” before Harper’s Violet Lucca wrote back, “Or she’ll just get plastic surgery at 16 a la Kylie Jenner and we’ll all have to pretend that she always looked that way,” she said. “I can’t allow myself to feel too sorry for the incredibly rich!” a seemingly bitter Lucca added.

After experiencing a colossal amount of backlash, both journalists got on Twitter once again to make a statement. The critic, Collins tweeted, “I’m sorry about the Blue Ivy tweet — bad joke, and black girls in particular deserve better,” he said. Genuine or not, he maintained his portrayed sincerity in a tweet replying to another user which said, “No, you’re right. Poor form on my end. Thanks all for calling it out.” 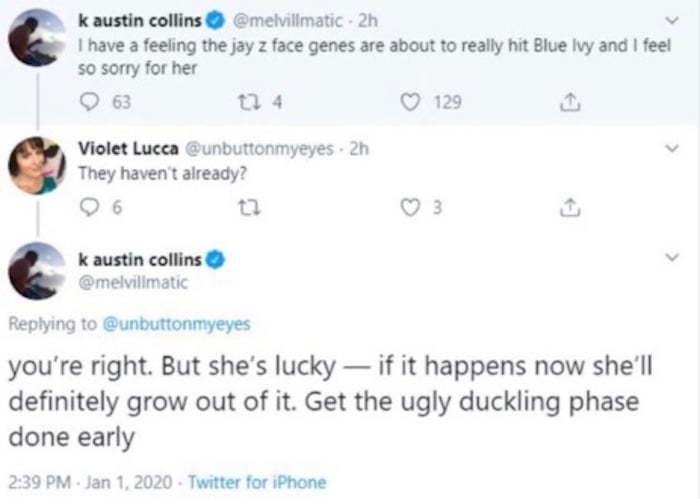 The woman, on the other hand, who earlier suggested that Beyoncé and Jay-Z’s 7-year-old daughter ought to opt for surgery when she’s a teenager was a bit less succinct in her “apology” tweet. She responded to another Twitter user writing, “Sorry I was cleaning my apartment while this blew up,” Lucca began. “Children of famous ought to be off limits, but time and again they haven’t been. So I said something petty and have been called ugly, old, and a racist,” she tweeted. While this could not be farther from an apology, the writer seemingly ended it there.

Social media users were demonstrably outraged by the woman’s flagrant indifference after such an overt act of degradation, and of a child. Lucca’s condescending sneer continued in a second tweet that feigned accountability. “I’m not playing the victim…sorry that I insulted Beyoncé’s daughter by suggesting that she might get plastic surgery some day, like many children of famous people do,” she wrote.

It appears the web editor still believes she was not out of pocket. Many people on social media found the tone of her tweets sarcastic and crass. Did anyone else catch her insinuation that the uproar was because it was “Beyoncé’s” daughter, or did I read that wrong? One could say that is where her inadequate remorse was most evident.

Privilege is ugly when it is challenged.

??? Leave Black Girls Alone In 2020! Black features are beautiful. Black skin is beautiful. Leave Us Alone. keep your hatred to your damn self in this decade https://t.co/ZTYWlQ8IXC