Tekashi 6ix9ine amps up his taunting of Lil Durk over his album sales.

Tekashi 6ix9ine is supposedly off of his social media hiatus after the flop of his sophomore album TattleTales. The album made a disappointing debut at No. 4 on the Billboard 200 and sold just over 53,000 total album-equivalent units in its opening week. Since then, he’d been mostly quiet, but it seems he has a personal mission to go after Lil Durk. Durk is still mourning the loss of his colleague King Von and Tekashi is exploiting that for cheap points.

Just a few days ago, he accused the Chicago rapper of exploiting King Von’s murder to increase sales of his new mixtape. Tekashi 6ix9ine once again jumped into Akademiks’ Instagram comments yesterday, December 29, to claim that Durk had miserably low album sales. This time he attacked Durk’s late cousin Nuski as well as rehashed his claims about how Durk is handling King Von’s death.

Tekashi said, “Nuski and Von died for this???? @lil durk.” He was responding to Akademiks’ post which stated, “Big W or Big L for #lildurk ?? Since he dropped Thursday, this is sales from just 1 day of sales.” 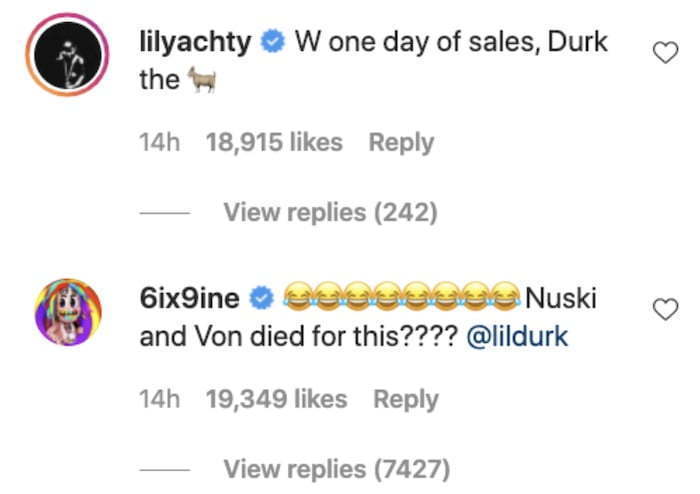 Unfortunately for 6ix9ine, he doesn’t understand that the 23,000 total album-equivalent units were collected in just one day and not over a week. Lil Durk released his latest work, The Voice, on a Thursday instead of the usual Friday. This has skewed how the sales are counted.

Durk also explained this in one of his Instagram stories where he said, “Trenches behind me that’s all I need. I did 23K in 1 day not the first week. Cap.” The album is on track to sell about 55,000 total album-equivalent units by its second week which is 2000 more than Tekashi’s “TatteTales” did in its opening week. We doubt this is the last we’ll hear on the matter from Tekashi.