The dancehall deejay voices his opinion on the Jamaican government stopping Kanye West from selling Jamaican branding merchandise. Mr. Vegas has somewhat taken on the persona of Social Media Commentator in recent years. His ‘MV Corner’ podcast is always buzzing, touching on some of the most important/current newsworthy topics in circulations. Kanye West‘s moving Sunday Service made its stop in Jamaica’s Emancipation Park on Friday, October 18, 2019. Mr. Vegas recently chimed in on the ban imposed on Ye’s team for selling Jamaican branded memorabilia on the “Jesus Walks” rapper’s website.

Minister of Culture, Gender, Entertainment and Sport, Hon. Olivia’ Babsy’ Grange recently caught wind of the sale of items such as shirts and caps, bearing Jamaican Coat of Arms, Flag, National Bird, and other National Symbols. She released the following statement, “It has come to my attention that items of clothing printed with national symbols and emblems are being offered for sale online. I noticed Kanye West and members of his choir wearing similarly emblazoned items during their special performance in Kingston last night, but I was not aware at the time that the costumes were being sold online.” 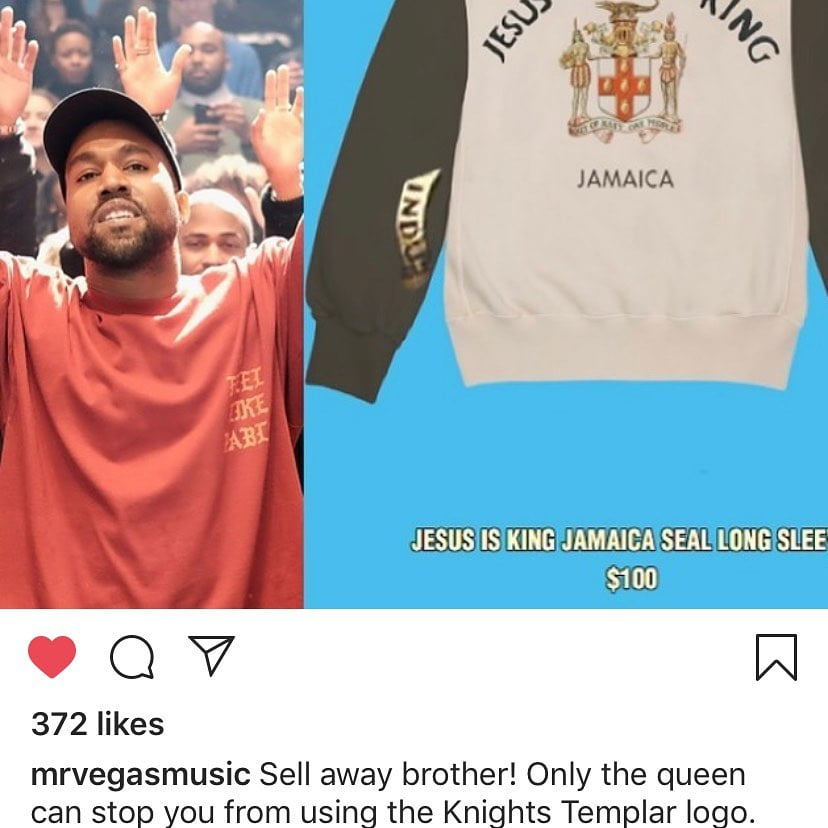 She went on to say, “We are aware that over vendors are selling Jamaica branded products emblazoned with our national symbols and emblems.” The Minister mentioned, “Several years ago, when I first served as Minister, I had set up a committee to review and devise a strategy for dealing with the proper use of our emblems and symbols. That work was stopped at the change of administrations. I have been granted permission to reestablish the committee and to continue the work. The membership of the committee with include representatives of the Office of the Prime Minister, the Jamaica Intellectual Property Office, the Ministry of Culture, Gender, Entertainment and Sport and others”

The release from the Minister did not offer a clear breakdown of any law which stops the use of certain symbols. If you ask the average Jamaican citizen the describe the look of the Jamaica Coat of Arms, they may indeed be able to tell you the meaning of each element. However, how many Jamaicans know how, when or by whom should the Jamaican symbols be used? Is there even a written document outlining the pertinent information on the use of the symbol?

With this in mind, Mr. Vegas’ support of Kanye using the symbols, especially Jamaica’s Coat of Arms, could be legit. He recently made a post to his Instagram account of Kanye alongside one of the Jesus Is King shirts that were being sold. He captioned the post, “Sell away brother! Only the queen can stop you from using the Knights Templar Logo.”

The Jamaican Coat of Arms bears some resemblance to that of the Templar’s through the use of the Red cross in the design. It seems Mr. Vegas wanted to point out to his followers that Jamaica does not have any say over the use of the symbols since they were borrowed from British Culture, and we are still under the rule of the British Monarch. He could also be saying Kanye is doing God’s work. Therefore, the use of the Coat of Arms, which is similar in look to the Templars, is only fitting.

Vegas, who is no stranger to the backlash, has come under heavy fire for his post. “I think he’s being sarcastic. He knows how to get his critics riled up. So……..him just run wid it,” mentioned dancehall artiste Stacious.

Another person slammed the “Heads High” singer, “Once everyone is with something, Gaygas always wants to be that person who disagrees, even when he clearly knows he sounds dumb as sh*t. Don’t pay him any mind ppl, Gaygas is jus an attention seeking madman. Right now if you say the sky blue, Gaygas a change him mind and say no it red, jus becaz everybody a say it blue.”

Do you think that Mr. Vegas has a point, or is he merely playing Devil’s Advocate?