Dancehall deejay Vybz Kartel will be hosting his Gaza Gala birthday bash this Friday and Saturday.

The grand affair will be held at the Building night Club in Kingston on Friday and Club Jamaica Jamaica in St. Ann on Saturday.

There will be live performances by Vybz Kartel and the Gaza Empire, while music will be provided by Chromatic, Rolexx, Richie Feelings and Total Eclipse.

According to news coming out of the Gaza, this event will make up for fans who didn’t see Vybz Kartel performed over the holiday season when the Building was raided by law enforcement officials. 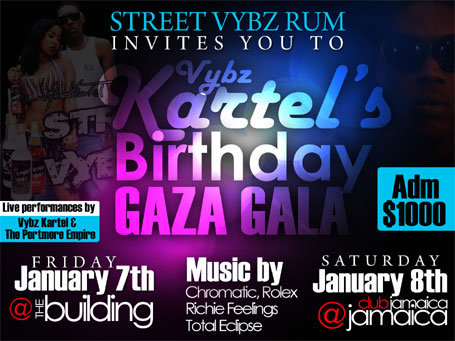