Love and Hip Hop Atlanta star Spice has had enough of her baby daddy.

Heavyweight dancehall hitmaker Spice has no doubt gone to great lengths to defend her Sumfest bestowed ‘Queen of Dancehall’ title. No sooner had she been crowned “Super Mom” by Bounty Killer last week, her ex-fiance Nicholas Lall resurfaced to claim her credentials. Taking issue with her co-parenting skills, Lall accused the Love and Hip-Hop star of a different kind of ‘social distancing’ – blocking her two children from meeting or mingling with their siblings.

His wordy IG caption contained a heartfelt message to his children Nicholas and Kayla with some subliminal hashtag hints about who the post was really for. “You are both my kids, you guys might be different mom but you guys are blood you guys have a bond from day one,” Lall began. “No one can come between the bond you guys have just continue to love each other from a distance no child should be stop from showing love to their sibling love is all I teach you guys continue to love, love you both this too shall pass #tomdrunkbuttomnuhfool #amestillwawin.”

Spice, who gained full custody of their children Nicholas Jr. and Nicholatoy after their 2015 split is extremely sentimental towards her kids, both on and off social media, and had plenty of time to clap back at Lall’s cryptic criticism. The “Cool It” deejay, who has gotten into heated internet squabbles with her baby daddy before, chose her usual IG story posts to set the record straight yet again.

Calling him a ‘clout chasing donor,’ she blasted him for his trend of tailgating her popularity despite having three other sets of kids, including a newborn. “You have 3 other baby mama, you have daughter weh born last year, daughter live country, why you nah post your other kids dem and live pan the other mothers?” she questioned. 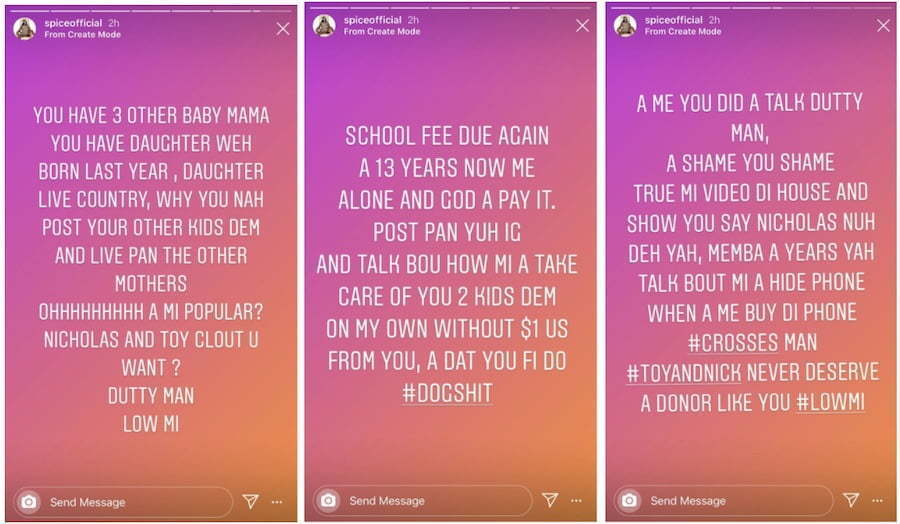 Rehashing the lack of financial support that she called him out for last year, Spice brought us down social media memory lane to 2019’s tit for tat sparked by a viral clip of him showing up at his son’s graduation unannounced. Furious and frustrated, she leveled him in quick time last July via her preferred medium.

“You well a make people video you like you did even know the teacher name when yah search fi him group. You make sure September morning you come video yourself at the school a “PAY” the school fee and move with the clout sh*t.”

Clearly not about that blended family life, the proud mom added a few spicy hashtags of her own, and hopefully, #crosses and “#loww mi” are enough to convey that she’s over it.